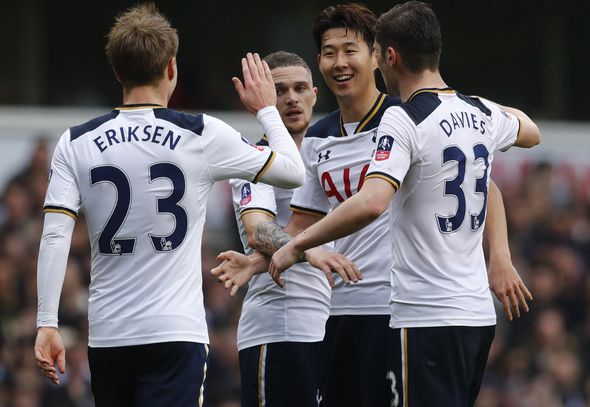 Tottenham bid farewell to their White Hart Lane home with an impressive 2-1 win over Manchester United in the Premier League on Sunday.

Victor Wanyama handed the home side an early lead, converting Ben Davies’ cross into the back of the net, before Harry Kane doubled their advantage shortly after the break.

Manchester United pulled a goal back through Wayne Rooney late into the second-half, but Tottenham held strong to ensure they moved into their new era on a high note.

But despite what was a pleasing display with few areas of fault for Tottenham, here, Football Insider picks out the three worst players from the victory.

The energy levels and movement of the 24-year-old could not be faulted, but he could have made more of an impact in front of goal. The South Korean star has enjoyed remarkable success as a goalscorer this season, netting 19 goals from 45 appearances in all competitions. However, he didn’t appear all too keen on hitting the back of the net against Manchester United. While you could call it unselfish, Son often sought out a pass to a team-mate instead of a shot on goal, but when he did break through the defence, he fired his shot straight at David De Gea. It was a fantastic opportunity wasted, and fortunately, it didn’t cost them three points.

Trippier’s return to the starting eleven was an intriguing one, particularly as Kyle Walker – the man he replaced at right-back – had no injuries or suspensions ruling him out. Instead, Mauricio Pochettino opted to hand Trippier a start because of his fine form. However, while at times he looked solid at the back, Anthony Martial did cause him a number of problems later into the game. The French international forward had pace to burn, and looked the most dangerous of any Untied player in the final third. But by no means is it a display that should call for Walker to be reinstated to the line-up.

To label Dier one of the worst players on the pitch for Tottenham would be harsh, considering his success in patrolling the midfield. He is clearly more adept in a central or defensive-midfield role, as opposed to a centre-back, and Pochettino will have taken note. However, when it comes down to the impact he made compared to his team-mates, or who made the most (even if only a few) individual errors, Dier can be picked out. The main fault was the accuracy, or lack of, in some of his passing. Spurs looked to move the ball quickly between midfield and attack, and hit United with their pace, and on the odd occasions, Dier saw his distribution miss the intended target. The likes of Wanyama, Christian Eriksen and Dele Alli, meanwhile, simply could not be faulted.

In other Tottenham news, Pochettino has made this major revelation about the Tottenham project, fans will be delighted.