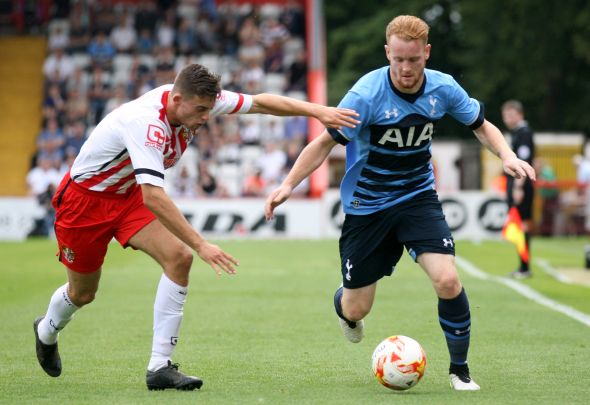 Tottenham defender Connor Ogilvie has suggested that he will push distractions to one side to concentrate on fulfilling his potential during pre-season training.

The Spurs academy graduate has drawn plaudits for his performances at age-group level but hinted that he is ready to take his game to a new level.

In a message on his personal Twitter account on Tuesday night, Ogilvie, 20, tweeted a photo of himself at pre-season training and expressed his delight to be back at work.

He also suggested a new-found focus by claiming he would be “more hungry, more focused and more locked in”.

Good to be back at work…more hungry, more focused and more locked in ⚽ #COYS pic.twitter.com/IfvnR6pxC1

Ogilvie will be hoping the 2016-17 season can be his breakthrough season after he spent 2015-16 on loan at Stevenage, where he played 21 times for the first team.

Spurs having a great reputation for nurturing young talent in recent years, with Harry Kane, Ryan Mason, Danny Rose, Tom Carroll and Andros Townsend all excelling after graduating from the academy.

The youngster appears to be ready to take his football seriously, and that any run-ins with staff are a thing of the past.

Kane is the perhaps the biggest success story and after two exceptional seasons for the Lilywhites he is set to be awarded with a new contract – a decision Shaka Hislop believes is business for both parties.

Further to that he scored twice in two FA Youth Cup ties and made a further seven appearances for the Under-21s, scoring once.

Despite not having any first-team appearances with the North London side, his displays in 2013-14 earned a call into the first team squad for Europa League trips to Tromso and Benfica and he was on the bench against Benfica.

The former England Under-16 and Under-17 player has one year left on his White Hart Lane contract.

In other Tottenham news, they have been told what they must do to land this prolific striker.