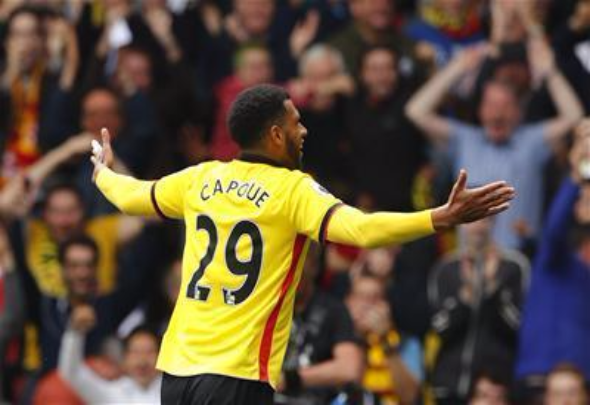 Etienne Capoue has scored four goals in his first five games of the new Premier League season – and Tottenham fans are wondering on Twitter where this player was when at White Hart Lane.

Capoue, 28, completed a move to Tottenham from Toulouse in the summer of 2013 for £9.3million.

He stayed at the club for two years scoring just two goals in 36 appearances at Spurs before moving to Watford for £6.3million.

The experienced midfielder has started the new campaign in impressive form for the Hornets and added to his goal tally with a 34th minute strike in the surprise 3-1 win over Manchester United on Sunday.

Spurs fans on social media are happy to see one of their former players make a success for themselves, while others are wondering why he didn’t hit the same heights at Tottenham.

Did Capoue ever score for #thfc ?

Happy to see Chadli and Capoue do the business elsewhere especially against West Ham and Man United. #THFC

The north London side could do with a goal threat from their midfield having only scored more than one goal in one game this season, with an emphatic 4-0 victory over Stoke.

However, their defence has remained strong having conceded just two goals from their first five matches leaving Spurs in third place.

Mauricio Pochettino’s side finished third last season, but they will be looking to improve on their position, while also competing in the Champions League this season.

In other Tottenham news, Harry Kane delivered a message on Twitter expressing that he will be working hard to get fit as soon as possible.