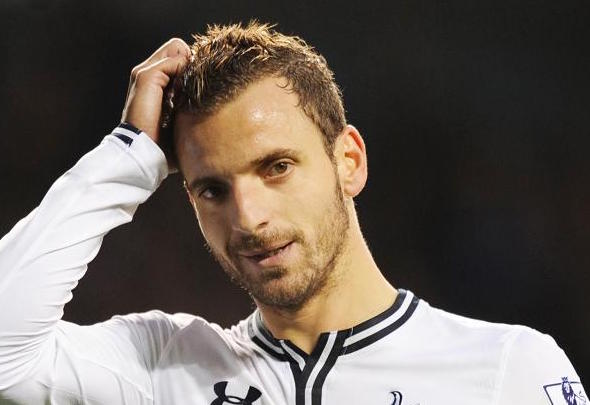 Roberto Soldado had a frustrating night as he continued his poor record against English opposition in Villarreal’s Europa League semi-final against Liverpool.

The former Tottenham striker was substituted after 73 minutes of the first leg clash in Spain, which ended in a 1-0 win to the home side following a late Adrian Lopez goal.

Soldado, whose role at Villarreal is that of a withdrawn second striker, had the same influence on the game that he did for many when at Spurs.

The 30-year-old had two first-half shots but could do little to unhinge a Liverpool defence that was superbly marshalled by Dejan Lovren and Kolo Toure.

The Spain international failed to add to his eight-goal tally for Villarreal this season, which has been complemented by 13 assists from his new playmaker role.

Spurs fans took to Twitter to give their views on the performance of the striker, who had two difficult seasons at White Hart Lane after joining from Valencia.

Soldado showing shades of his Tottenham form as he shoots wide of goal… https://t.co/tRUcU6S5CY

When soldado come to prem LOL

Soldado – crap at spurs. Crap back in Spain. #crap #LFC

Watching Soldado is just as infuriating now as when he was in a spurs shirt ?

In other Tottenham news, Mauricio Pochettino is weighing up four options as he considers how to replace the banned Dele Alli for Spurs’ title run-in.