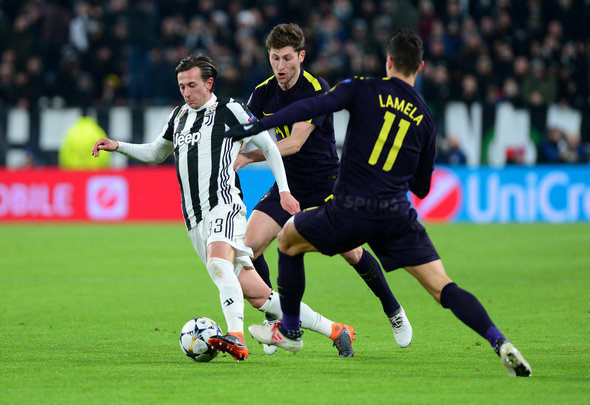 Tottenham fans have taken to social media to destroy the first half performance of left back Ben Davies in their Champions League clash away to Juventus on Tuesday.
The north London side suffered a nightmare start in Turin, with Gonzalo Higuain netting a sweetly hit volley in just the second minute after a well worked free kick to give the home side the lead.
Spurs found themselves 2-0 down behind before the 10 minute mark, after Davies brought down Federico Bernardeschi in the box to give Higuain the chance to double both his and his side’s goal tally, slotting to ball to Hugo Lloris’ right.
As a result of his defensive errors, Spurs fans were quick to slaughter the Welsh international’s display on Twitter, with the 24-year-old having been a mainstay in the side with 27 appearances across all competitions this season.
Here, Football Insider has rounded up a selection of the supporters’ best tweets:
https://twitter.com/JuiceYoda/status/963502894174662659
https://twitter.com/MatthewWheat_/status/963507257060331520

Davies shocking already and it's only been 10 minutes

Ben Davies is still on the plane

Spurs had their chances to reduce the deficit against the Italian champions and last year’s runners up in the Champions League, with Harry Kane seeing a firm header blocked at point blank range by Gianluigi Buffon, before the England striker rounded the veteran to make it 2-1 at the break.
It could have been 3-1 on the verge of halftime, but Higuain was unable to convert from the spot again after Davinson Sanchez’s foul.
The reverse fixture takes place in three weeks time at Wembley, with Spurs playing Huddersfield at home four days before the clash.
In other Tottenham news, former Chelsea man Frank Lampard has revealed the one thing he adores about Spurs.