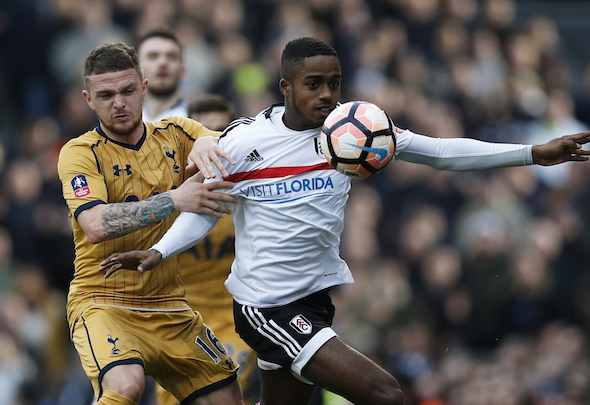 Fulham wonderkid Ryan Sessegnon is on his way to Liverpool, according to a report.

Website Football London claim the Merseyside giants have been “working tirelessly” to seal a deal for the highly rated left-back, 16.

It is said that Liverpool have made a breakthrough in their pursuit and are confident that Sessegnon will sign for them in the summer.

It would be a major blow to Tottenham, with sources telling Football Insider that the north Londoners have been closely tracking the teen sensation since he was 14.

Football Insider revealed on Monday that Sessegnon had signed a pre-contract with Fulham as the club moved to protect themselves from Premier League predators ahead of the summer window.

He is still on a scholarship contract at the Championship outfit and cannot pen a professional deal until he turns 17 in May, but the pre-contract stipulates that he will sign a formal professional agreement at the earliest opportunity, which will be his birthday on 18 May.

This will enable Fulham to hold out for a higher fee for Sessegnon, who has also attracted interest from super clubs Arsenal, Chelsea, Manchester United, Manchester City and Bayern Munich.

The youngster, who can play at both left-back and on the left wing, has made huge strides this season as well as demonstrating a genuine eye for goal.

He has scored six goals in the campaign, including two in Fulham’s stunning 3-1 win at Newcastle last Saturday, and also weighed in with three assists, remarkable tallies for a player who is not only foremost a defender but also one who is so young.

There is not so much a queue to sign Sessegnon, as a stampede. Ridiculously talented and precocious, he would be a marvellous signing for any club whose manager is willing to put his faith in youth and hone them on the training pitch. Liverpool and Sessegnon appear an ideal fit. Jurgen Klopp is renowned for his development of outstanding young players, and there appears no limit to what Sessegnon can achieve. Fulham have known for some time they have a remarkable young player on their hands and the big boys have been beating a path to the Cottage to try and persuade the youngster to up sticks. A huge sum could still pass hands to push the deal through, but for a team crying out for a long-term left-back option, this could be a fabulous signing for Liverpool.