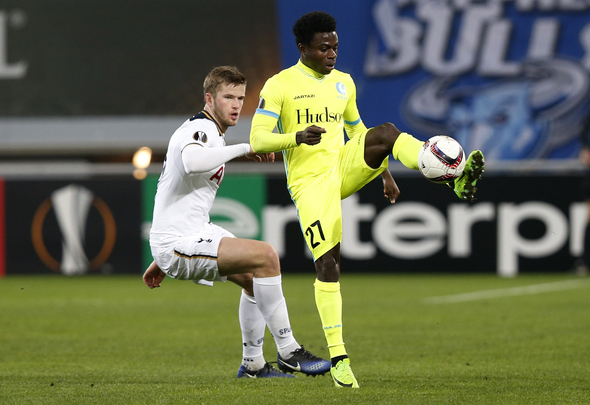 Tottenham are one of several clubs interested in Gent attacker Moses Simon, according to a report.

The Daily Mail claimed in their live transfer blog on Wednesday [4:17pm] that Liverpool, West Brom and Brighton are also keen on the Nigerian international.

It is understood that one of Spurs’ newest Premier League rivals Brighton have tabled a bid worth £8.7million for the 22-year-old, but have had it rejected by Gent, who valued their player at £13million.

The report says that Spurs became interested in Simon after he played a starring role when knocking Mauricio Pochettino’s men out of the Europa League in February.

Simon featured in both legs of Gent’s surprise 3-2 aggregate victory over Tottenham in the first knock-out round of the competition, but saw his side’s progress halted in a domestic clash with Genk in the following round.

The 11-times Nigeria international made 42 appearances across all competitions for Gent last season, scoring five goals and supplying seven assists.

He moved to Gent in 2015 after spending a season with Slovakian outfit AS Trencin and is a product of the famous Ajax academy.

Simon would be a tidy addition to the Spurs squad and would be available on the cheap as he is rated at just £13million. Tottenham are the only Premier League club not to sign a new player yet, and they definitely need someone who can fill in the positions that Simon can. The Nigerian can play on the left wing, in a No 10 role or as a striker, which are all areas that Pochettino needs to add more strength in depth to. Simon won’t be coming in to oust Harry Kane, Dele Alli or Christian Eriksen from the team, but could prove to be a very handy back-up option if any of them suffer injuries. He could also prove to be a very good financial buy who could be worth more in the future.

In other Tottenham news, Jamie Redknapp has explained why the north London club are finding it hard to recruit new players.