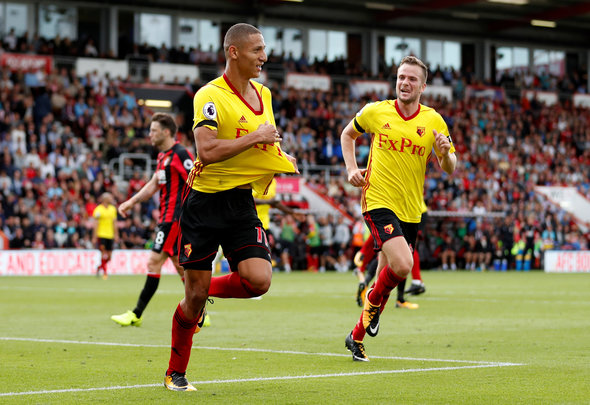 Tottenham are in the hunt for Watford attacker Richarlison, according to a report.

The Mirror claims that the Spurs scouts have been on multiple trips to cast their rule over Richarlison, 20, who has hit the ground running at Vicarage Road after signing from Fluminense in the summer for £11.2million.

Richarlison has enjoyed a blistering start to the season with Watford, scoring four goals and supplying three assists in 12 appearances across all competitions, wasting no time in settling down into English football.

The Hornets surprised many by swooping for the highly-rated Brazil Under-20 international, who has already shown that he is a great prospect and one that Tottenham would like to sign.

The jet-heeled winger is known for his rapid pace, his ability to the find the back of the net and for possessing the versatility to make for a difficult player to defend against.

Richarlison has made an instant impact upon arriving in the Premier League and has been a large part of Watford’s impressive start to the season, so it’s no wonder why one of the big boys have started to look at him. As the Brazilian only signed in the summer for £11.2million, you can imagine that Watford would want to slap a massive price-tag on him and that could make any interest seem pointless from Spurs’ point of view, as there are more established, better-known players out there that could come in for cheaper. Mauricio Pochettino does need extra depth in his attack so it’s good to see that he and his recruitment experts are out there looking for someone who can provide that.

In other Tottenham news, Spurs fans reacted worryingly after contract news was confirmed on Monday.