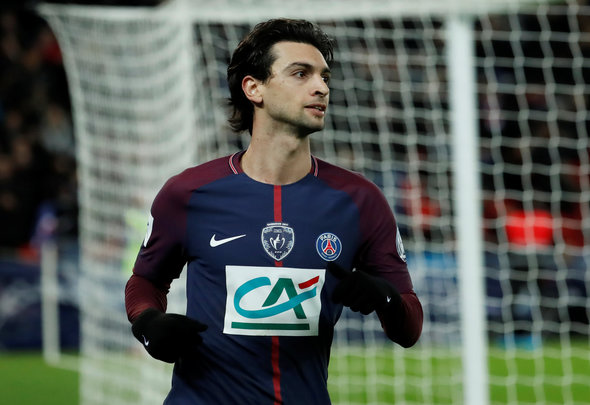 Tottenham and Liverpool have been installed joint-second favourites to sign Paris Saint-Germain playmaker Javier Pastore before the January transfer window closes on Wednesday night, according to the latest bookmakers’ odds.
BetVictor have priced the two Premier League clubs at 9/4 to sign up Pastore, 28, by the end of the month however Inter Milan are the huge evens favourites to land the Argentina international.
Roma (8/1) and Chelsea (12/1) are also in the running to sign Pastore after the Telegraph reported that PSG have made him available to leave the Ligue 1 club this month as they seek to look after their finances.

Sky Sports Italy journalist Gianluca Di Marzio has recently reported that Tottenham and Liverpool have tabled bids worth up to £35million in order to sign Pastore this month.
It is understood that the former Palermo playmaker is earning £110,000-a-week with PSG and although he may be a wanted man in England, it seems that Inter Milan is his most likely destination as his agent has jetted out to northern Italy to strike up a deal.
Pastore has made 19 appearances in all competitions for the Parisiens this season, scoring five goals and supplying one assist in the process.
He has had his injury woes by being sidelined on a couple of occasions, but it seems that he has been deemed surplus to requirements and could exit Paris by Wednesday.
In other Tottenham news, these title-holders are in the hunt to sign a £22,000-a-week Spurs fringe player.
We’ve launched a << BREAKING NEWS FEED>> exclusively for your club. ‘Like Us’ on Facebook by clicking here if you want 24/7 updates on all Tottenham breaking news.