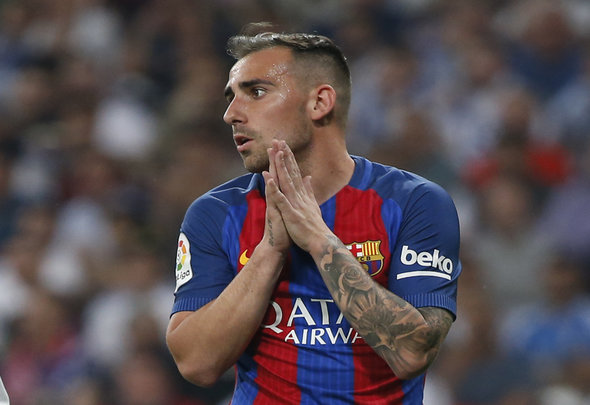 Tottenham could see their title hopes handed a major boost if they were to make a January swoop for Barcelona’s Paco Alcacer.

Spanish publication Sport claim on their website that the Catalan giants are looking to offload the 24-year-old striker, after seeing himself drop down the pecking order at the Nou Camp.

Admittedly it is quite a forward line to break into, with the likes of Lionel Messi and Luis Suarez for competition, and that is why he started just seven of the club’s league games last season.

It was not a poor season by the former Valencia man, with eight goals in 29 appearances, in a campaign where he was regularly given less than 20 minutes to prove himself each match.

However Alcacer has fallen firmly out of favour of manager Ernesto Valverde this season, with just one start out of his three appearances, failing to find himself included among the match day squad for most games.

With a potential World Cup place at stake, with Alcacer no doubt wanting to add to his 13 caps and six international goals, a move seems best for him, and Spurs could offer him the platform to shine.

There is no doubt Harry Kane is Mauricio Pochettino’s first choice striker, but Alcacer’s versatility to play in a deeper role means he could add the goals that the likes of Heung-min Son and Dele Alli have been missing from their games this season.

Alcacer also brings something different to the table to Kane and second choice striker Fernando Llorente, as he is happy to work as a link-up striker to bring other players into the game, rather than an out-and-out goal scorer.

That would benefit the likes of Alli, Christian Eriksen and the rest of the Spurs midfield, who appear totally reliant on Kane’s goals, although that is understandable with the form he has shown so far.

If Pochettino could find space for both the English and Spanish strikers in his side, teams would have a much harder time dealing with the Tottenham attack.

That would hand the North London side a major boost in their push for the title, which is why they must make a move come January.