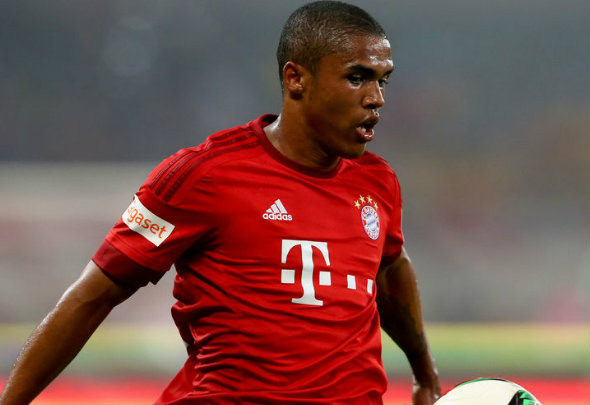 Tottenham are interested in signing Bayern Munich’s Douglas Costa, according to a report.

The Mirror reports that Spurs are prepared to spend up to £30million on the Bundesliga superstar who is open to a move away from the Allianz Arena.

Costa has started just 13 league games this season for Bayern and is becoming increasingly unsettled under Carlo Ancelotti.

He has also clashed with the club over his contract – set to run out in 2020 – and club president Uli Hoeness has taken a hard line over his attempts to get a fresh deal.

Hoeness said: “That doesn’t work with us. He can try 10 more times. He is certainly not a hardship case.”

If Spurs can push the deal through, it could equal their previous transfer record signings of Erik Lamela and Moussa Sissoko.

The French international has flopped in his first season in North London and Tottenham are willing to let him leave in the summer.

Costa, 26, has admitted that he has had contact with at least one team in England, but hasn’t disclosed who it is.

“I cannot comment on names, there are contacts with teams from England, Spain and also France. But we respect Bayern,” he said, as quoted by the Mirror.

“First we want to get together with them and look at what they think of it, and then we make a decision.

“I am still under contract with FC Bayern until 2020, I have three more years. Of course, football is a business, Bayern simply has to accept a bid and the others pay what they have to pay.”

The 18-times Brazilian international arrived at Bayern in 2015 in a £25.1million switch from Ukrainian giants Shakhtar Donetsk.

He was a key part of the Bavarian club’s first-team last season, but things have changed since Ancelotti replaced Pep Guardiola in the summer and he is no longer a consistent member of the starting-line up.

Hamstring and knee injuries have scuppered his campaign but he has still managed to score seven goals and supply nine assists in 31 appearances across all competitions.

He also has three goals in 18 appearances for the national side.

Costa got himself on the score sheet in the 5-1 thrashing of Arsenal at the Emirates in March.

Pochettino has to do something that can take Tottenham to the next level in the summer and replacing Sissoko with Costa will do exactly that. He is a versatile winger that can play on either side of the pitch and is even good enough to oust someone like Son Heung-Min from the starting XI. £30million seems like a great deal too and Spurs should really try to get this deal over the line to help them in the Champions League next season. Pochettino and his men should also be gunning for the title given how well they’ve played recently and signing Costa will greatly improve their chances.

In other Tottenham news, Ledley King has been blow away by this Spurs academy prospect.