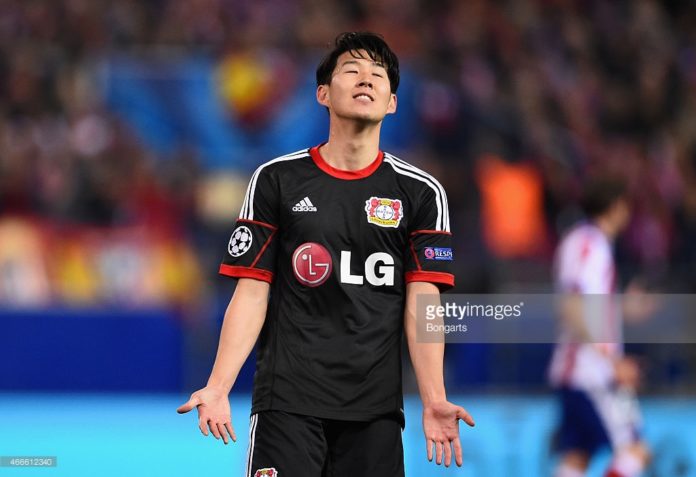 Son is set to fly to London to undergo medical tests with Spurs at their Enfield traning headquarters.
Tottenham have finalised a fee with Leverkusen for the 23-year-old after making an offer of £22million.
They are now waiting for Leverkusen to release the South Korea international and for him to complete the formalities of the transfer.
Son has been targeted due to his pace and ability to play in any of the three positions behind the centre-forward. He has a fine scoring record at Leverkusen and former club Hamburg, finishing the last three seasons with Bundesliga hauls of 11, 10 and 12 goals. He also scored five times in 10 Champions League matches last season and his 44 appearances for South Korea have yielded 11 goals.
The Son medical throws fresh doubt on Spurs’ attempts to prise Saido Berahino from West Brom, even though they play in different positions. England Under-21 international Berahino is more of an orthodox spearhead while Son plays behind the main striker or on the flanks.

The Londoners made a second bid of £21million for Berahino on Tuesday and could return with a third bid of around £23million. However, West Brom are standing firm on their £25million valuation of the forward.
The Son deal is a boost to manager Mauricio Pochettino as he continues to reshape the Spurs squad, with Erik Lamela closing in on a transfer to Inter Milan.
Son came through the ranks of Hamburg’s youth academy, which he joined aged 16 in 2008. Following three years at the Bundesliga stalwarts, he moved on to Bayer Leverkusen in 2013.