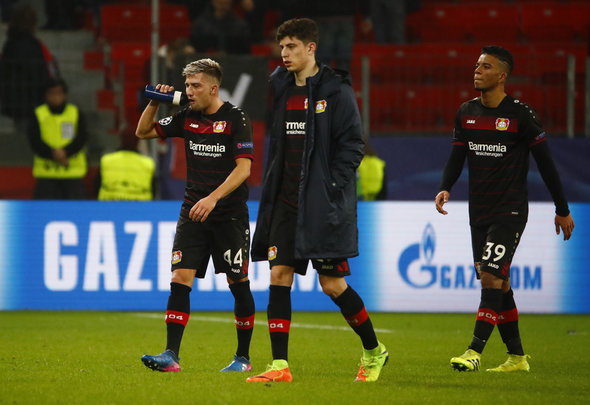 Tottenham are eyeing defenders Jeremy Toljan and Benjamin Henrichs from the Bundesliga, according to a report.

Sky Sports claim that Spurs are looking at full-back options this summer to be potential replacements for Kyle Walker should he leave to Manchester City.

It is understood that scouts from the north London club have watched Hoffenheim’s Toljan and Bayer Leverkusen’s Benjamin Henrichs.

However, the report details that Henrichs only signed a new long-term deal in May and is set to stay with the German club until 2022.

Mauricio Pochetten is on the search for a new full-back and wide men have proved crucial in his side’s system during his time with the club.

Toljan played for fourth-placed Bundesliga side Hoffenheim last year and made 21 appearances across all competitions.

The 22-year-old is a versatile player that is a left-back by trade, but has also played in the opposite full-back position and would be able to cover Walker’s slot if needed.

He has been a prominent feature of Germany’s youth sides right up to the Under-21s side and is a highly rated talent.

Meanwhile, right-back Henrichs plays for Leverkusen and his team finished 12th in the league last year.

However, the 20-year-old did play seven times in the Champions League last year and even lined up against Spurs twice in the group stages.

Spurs will certainly need a new full-back if they do lose England international Walker and he will be a hard act to follow. The right-back has become a key players during recent seasons and his athleticism on the flank makes him a major asset. However, understudy Kieran Trippier is certainly good enough to step up to the mark and even overtake his teammate in the pecking order during the end of last season. Spurs’ interst in Henrichs is unlikely to go elsewhere due to his new contract talks and it would take a major offer to seal a deal. Meanwhile, Toljan looks an exciting talent and is someone that could provide competition at Spurs.

In other Tottenham transfer news, they have made an enquiry for an international midfielder.