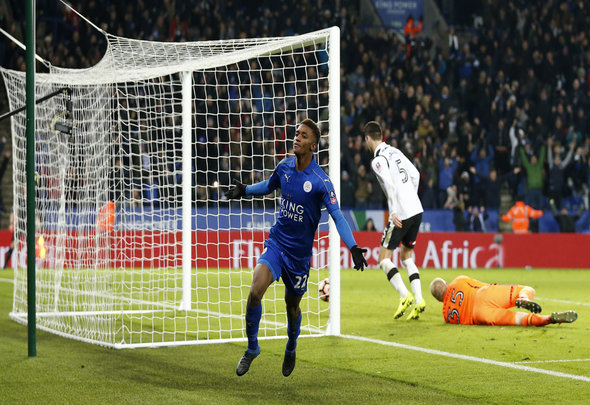 Tottenham are readying themselves ahead of a summer move for Leicester City winger Demarai Gray, according to a report.

The Mirror claim that the electric winger could be set to quit the club this summer after becoming frustrated with his lack of first team opportunities.

It is understood that there is a release clause written into his contract that would allow the 20-year-old to quit for as little as £12million, and Tottenham are among a host of Premier League clubs monitoring the situation.

Mauricio Pochettino is out to put the finishing touches on his Tottenham squad this summer to make them worthy Premier League title contenders, and Gray has been a long-term reported target.

The Tottenham chief wants to add a pacy dribbler to his ranks, amid growing uncertainty over the long term futures of duo Moussa Sissoko and Erik Lamela.

With former Birmingham City youngster Gray likely to be available on the cheap this summer, Pochettino is expected to reignite his interest.

Gray has made 34 appearances in all competitions for Leicester this term, but he has started just 11 of those games. He has scored two goals and supplied four assists.

Pochettino has done wonders at Tottenham, and his remarkable transformation of the club could continue this summer if the club’s money is spent the right way. £12million for Gray is a bargain price, and Pochettino will be keen to unlock the potential of an impressive young winger that has been starved of regular action. Spurs will face tough competition for his signature from the likes of Everton and Liverpool, but Pochettino’s exciting project would be the better fit for Gray. There is already a vacancy in his side for a winger with pace and purpose, and the Leicester City man ticks all the boxes.

In other Tottenham transfer news, a Premier League rival has placed this £50m-rated Tottenham star at the top of their summer wishlist.