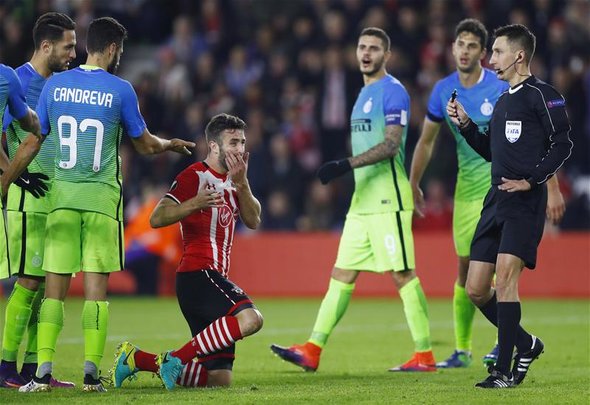 Tottenham are tracking Inter Milan winger Antonio Candreva with close rivals Chelsea planning a mega bid for him, according to a report.

News outlet Transfer Market Web have claimed on their website that the Blues are looking to submit a bid of around £24.6million for the 30-year-old right sided attacker.

However, the Stamford Bridge club could also face a battle for his signature with Spurs also said to be eyeing him up.

Candreva only made the switch to the San Siro last summer in a £19.6million move from Lazio, agreeing a contract until 2020.

He provided a fine eight goals and 11 assists in 45 appearances in all competitions in his debut campaign for Inter Milan, but the report states he could now be tempted by a move to the Premier League.

The attacker has been capped 47 times at senior international level for Italy and with the World Cup coming up next summer he may be looking to raise his profile.

Candreva is a talented attacker, but he is far from the type of player that Tottenham usually go for. The north London outfit have been known in recent seasons to buy players for the future who they feel can grow at the club and get better. At 30 it is fair to say that Candreva is not one of those players and he would also command a big fee. If Chelsea do want Candreva then they will likely be boosted by having Italian Antonio Conte in charge also, meaning this deal looks an unlikely one for Spurs in this moment in time.

In other Tottenham transfer news, a Euro giant has joined Spurs in the race for this English starlet.