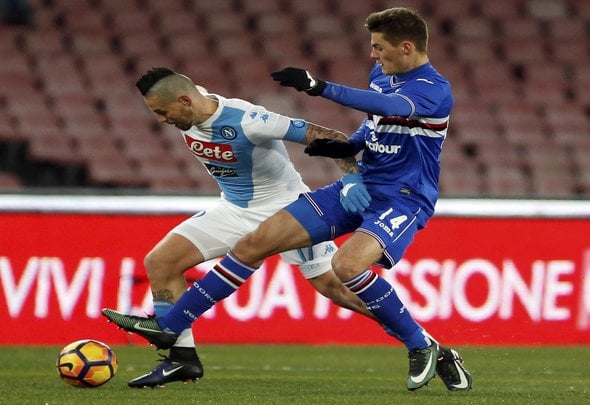 Sampdoria sensation Patrick Schick has opened the door to quitting the club amid strong interest from Tottenham, according to a reliable journalist.

Sky Sports Italy correspondent Gianluca Di Marzio has claimed on his personal website that the Czech striker’s talks with Sampdoria top brass have been postponed until later this week.

It is said that Schick’s representatives want him to move to a new league abroad, while the Italian club are keen for him to stay for at least another season.

Di Marzio reports that Tottenham and Arsenal are strongly pursuing the 21-year-old, who has also attracted interest from Juventus, Inter Milan and Napoli as well as a number of German clubs.

The will of Schick’s represenatives Pavel Paska,who is one of Europe’s most high profile agents, could prove decisive to the player’s summer transfer plans.

Schick has caught the eye of Europe’s elite clubs after bagging 12 goals and provided three assists in 30 league and cup appearances for Sampdoria this season.

The three-times Czech international has a release clause set at £21.3million.

Schick will not be the most well-known of Tottenham’s summer targets but he would still be an astute signing. The 21-year-old has height, pace and power and would add further physicality to Spurs’ already imposing side. The Czech can be a mate for Harry Kane as either a back-up striker or a number 10. But his real use may come as proven cover. Unlike Vincent Janssen, his goals have come in a tough league.

In other Tottenham transfer news, this trio have snubbed mega-money transfer elsewhere to sign for Spurs.