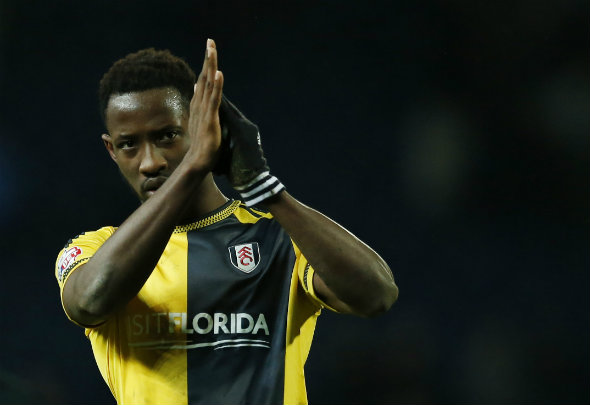 Fulham have offered Moussa Dembele an improved contract as they scramble to convince the striker to stay at Craven Cottage, according to a report.

Dembele had a medical at Tottenham in the January transfer window but the deal collapsed and he returned to west London.

Get West London claim that Fulham have made further moves to persuade Dembele to remain at the club and continue his productive partnership with McCormack.

It is said the player has been offered a major increase on his current £5,000-a-week salary.

This comes after Football Insider revealed in February that Dembele had rejected a contract offer from the club that would have quadrupled his wages.

The 19-year-old was a revelation at Fulham this season alongside strike partner Ross McCormack, scoring 17 goals in all competitions to prompt strong interest from Spurs.

The pair scored 36 Championship goals between them this season and the club are desperate to keep hold of their star duo.

McCormack has been linked with a move to Newcastle this summer while reports this week claimed Dembele was on the verge of signing a £27,000-a-week contract with Turkish giants Galatasaray.

However, Get West London report that no agreement is in place and that the youngster has yet to decide where his future lies.

Tottenham were thought to be keen on a return for Dembele once his contract expires at the end of the month, but there has yet to be a fresh approach from Spurs for the striker.

One thing Spurs do have in the favour is the fact that if Dembele was to decide to walk, Fulham would much prefer he signed for the London club.

Under Fifa regulations, any move outside of England would result in a loss in compensation for training costs as the player would be able to move overseas for a fee of just £250,000.

In other Tottenham transfer news, Spurs have turned their attentions to another striker after Wolfsburg entered the race for Vincent Janssen.