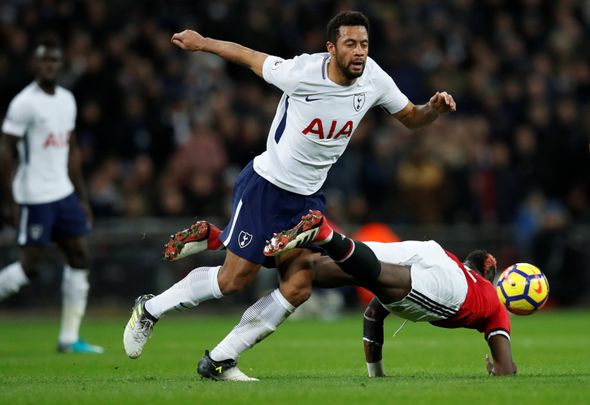 By Richard Parks
Football fans took to Twitter to rave about Mousa Dembele for his performance in Tottenham’s 1-0 Premier League win against Arsenal on Saturday.
Spurs completely dominated the match against their bitter rivals and were excellent value for the victory secured by Harry Kane’s goal after 49 minutes.
Spurs were dynamic and energetic in attack, solid in defence and in complete control in midfield, where Dembele was partnered by Eric Dier as Mauricio Pochettino fielded a 4-2-3-1 formation.
Spurs supporters were not the only ones hailing the dominance of Belgium international Dembele, with fans of other clubs watching the live televised match also struck by how he dominated Arsenal’s midfield trio of Jack Wilshere, Granit Xhaka and Mohamed Elneny.
A few hailed him as an “absolute monster” while one said he reminded him of Zinedine Zidane due to his ability to effortlessly control the match.
Here is a selection of the best messages on Twitter:

Man of the match by a mile. We were calling you Monster. Bossed the game , work rate exemplary and always looking for the ball. Absolute legend. Thank you for an awesome 90 minutes!!! Monster Dembele

Dembele reminds me of Zidane, no where near as good a player but the way he glides across the pitch with zero effort is pretty special

Dembele against Wilshere was as big a mismatch as you’ll ever see!

Love Harry but Dembele was MOTM for me yesterday. His control was immense, the ball appeared to be glued to his feet.

I couldn’t see him from inside Dembélé’s pocket

Mousa Dembele is something else. World Class player. He makes football enjoyable to watch.

https://t.co/hcq5tqpDnf
Mousa Dembele is a genius in CDM position as Box to Box or Deep Lying Playmaker #COYS

Moussa Dembele is an absolute baller. What a monster when the ball is on his legs. Always loved him since his days at Fulham.

Spurs’ win was a huge boost in their bid to secure a top-four finish and lifted them to third in the Premier League table.
In other Tottenham news, Harry Kane has totally destroyed Piers Morgan on Twitter in the wake of the north London derby.
Don’t miss out on breaking and exclusive Tottenham news by clicking here for our brilliant 24/7 updates on Facebook, Instagram and YouTube.