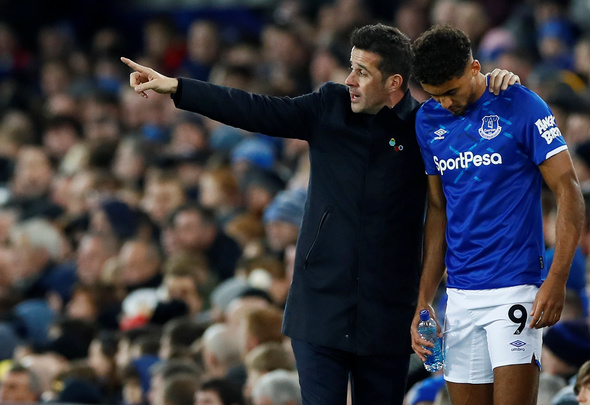 Alan Hutton admits he cannot see Everton manager Marco Silva keeping his job for much longer with a devilishly difficult run of fixtures over the coming weeks.

The former Aston Villa and Scotland defender, speaking exclusively to Football Insider assistant editor Russell Edge, says that the Portuguese boss could have hardly asked for a worse run of games, with outings against high flying Leicester City, Liverpool and Chelsea coming up.

Silva saw his men slump to a 2-0 home defeat at the hands of fellow strugglers Norwich City on Saturday, a result which leaves the Toffees 16th in the Premier League.

Having heard Silva come under fire from the home faithful, as well as looking forward to the Toffees’ upcoming fixtures, Hutton says he sees Silva losing his job sooner rather than later.

Hutton told Football Insider: “In my opinion it’s going to be Silva. I just think one, when your fans are singing: ‘You’re getting sacked in the morning,’ you’re struggling.

“Also the run of games that they’ve got, it’s literally unbelievable. It’s Leicester, Liverpool, Chelsea, Man U – I can’t see him getting through that. He might have one more game. The second game is the derby, if that doesn’t go well I can’t see him being in a job.

“The fans are in uproar at the moment so for me he’s the next manager to go.”

Saturday’s defeat to the Canaries mean that Everton have won just one of their last five games – a 2-0 win over West Ham – with a draw versus Spurs sandwiched between defeats to Brighton and Southampton.

In other Everton news, a Football Insider pundit has tipped a first-team mainstay to “make way” for a missing man in the side after an official update.