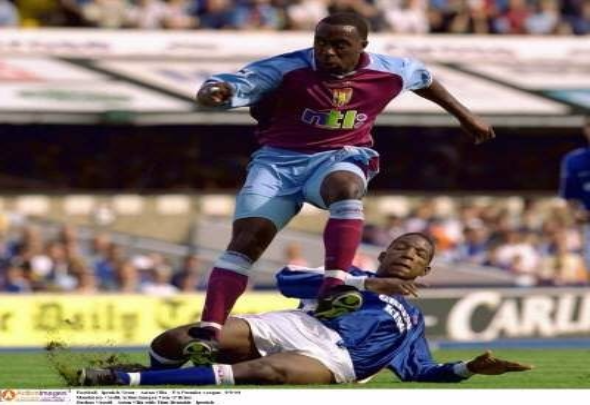 Darius Vassell has claimed that it must be “very hard” for Gabby Agbonlahor to play for Aston Villa.

The Birmingham-born striker supported Villa and went on to play for the club between the years of 1996 and 2005.

The 35-year-old now retired striker admits he has sympathy for fellow boyhood Villa fan Agbonlahor, who has been castigated by supporters for the series of disciplinary issues that embroiled him last season and culminated in him being stripped of the captaincy.

“I definitely advise a fresh start,” said Vassell to the Mirror. “I have been there – there is a lot on his shoulders as a Villa boy.

“If he feels as bad as I think he will, it will be very hard for him to play for the club.

“When it is your club it is different and when I went to Man City things were completely different.

“Obviously I had a responsibility towards Manchester and the club but it wasn’t like my life was going to be over if City lost.

“It just meant I had to go into training and work a bit harder but when I was in Birmingham I literally didn’t come out of my house if we lost.

“That is hard if you have to eat and put petrol in your car and go and meet people.

“Gabby must have been all over the place in his head last season.

“But he had a brief spell with England before and it shows the level he can get to.”

Vassell starred in 201 appearances for the club in all competitions during his nine-year stay scoring 45 goals.

The 22-time capped England international went on to play in 194 fixtures for Manchester City, Ankaragucu and Leicester respectively scoring 32 goals and he has called on the 29-year-old to now follow his path.

Villa owner Tony Xia has revealed on Friday that the club will send Agbonlahor out on loan this season.

The Birmingham-born forward has been left out of both of Roberto Di Matteo’s matchday squads this season and Xia has revealed that he and the manager met with Agbonlahor on Friday for crunch talks that concluded with them agreeing he should find a new club this season.

Agbonlahor has made 333 appearances for his boyhood club, scoring 84 goals since making his debut in 2004.

The three-time capped England international played in 18 encounters for his side in all competitions, but had a return of just one goal and two assists.

Aside from Agbonlahor Villa have three senior strikers at the club with Jordan Ayew, Rudy Gestede and Ross McCormack, the latter signing from Fulham for a fee of £12 million.

In other Aston Villa team news, Xia has admitted that the task of taking Aston Villa forward has been tougher than first expected.