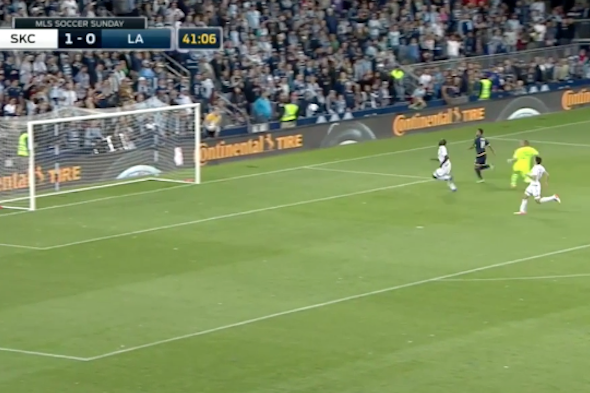 Giovani dos Santos gave Tottenham fans a reminder of his talent with a delightful finish for LA Galaxy on Monday.

The former Spurs attacker had a mixed spell at White Hart Lane but he is in prolific form in the MLS and converted his fourth goal in his last three games in a 1-1 draw against Sporting Kansas City.

Collecting Gyasi Zardes’ arced pass, he bamboozled goalkeeper Melia to level the scores and secure an away draw for his team.

The Mexican was not the only former Premier League to grace the field during a close-fought encounter that extended LA Galaxy’s strong run of form.

Steven Gerrard and Ashley Cole also featured, although the latter had a frustrating match.

The former Chelsea full-back was sent off for two bookable offences committed within 32 seconds of each other. Cole first received a yellow for taking his time on a throw-in and then compounded his frustration by making an awkward challenge on Benny Feilhaber following a heavy touch.

By that point Dos Santos’s considerably classier one had already done the business for Galaxy as they extended their unbeaten run in the MLS to six games.

In the latest Tottenham news, Thierry Henry has predicted some big-name signings will be heading to White Hart Lane.