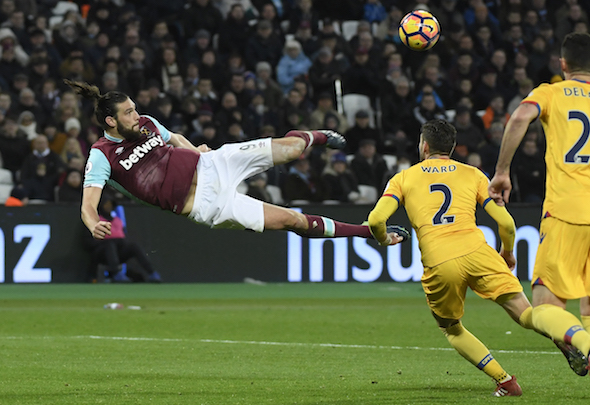 West Ham have rejected three bids from Chinese Super League clubs for Andy Carroll, according to a report.

Sky Sports report that bids from Tianjin Quanjian, Hebei China Fortune and Shandong Luneng have all been turned down by the Hammers as they have confirmed that the striker is not for sale.

The Chinese transfer window slams shut on Tuesday and some clubs still remain desperate to bring in a big-name signing.

Carroll has suffered an injury-prone season at the London Stadium and has only featured in 12 Premier League games.

However the 28-year-old has managed six goals during his limited time on the pitch, and West Ham want to keep hold of their talismanic striker.

The former Newcastle man was a key part of the club’s mid-season revival as he found the net on five occasions in his last seven league games.

West Ham are currently in the middle of a striker crisis and have had to rely on Michail Antonio, who spent a lot of last season playing at right-back, as the focal point on their attack on numerous occasions this season.

Antonio is the club’s highest scorer this season with eight goals.

Carroll moved to the Irons in June 2013 for a fee of £17.5million from Liverpool.

In total, the target man has scored 29 goals in 108 appearances for the club in all competitions.

He also has nine caps for England with two international goals to his name against Ghana and Sweden.

Despite Carroll’s recent injury struggles, West Ham cannot afford to lose their main striker. Diafra Sakho, Jonathan Calleri and Ashley Fletcher are the only other traditional strikers on the books at London Stadium and the trio are either injured or simply not good enough for Premier League football. With the transfer window about to shut, Chinese clubs are trying to do last-minute business but they’re not going to tempt any major star from his club at this point in the season.

In other West Ham news, a first-team striker was dumped to the reserves on Monday.