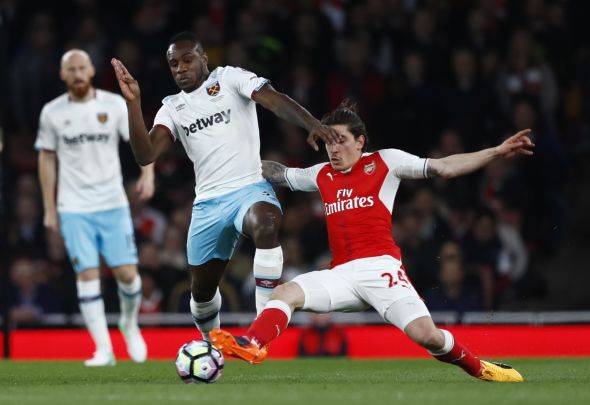 Slaven Bilic has delivered the crushing blow to West Ham fans that star winger Michail Antonio is out for the rest of the season.

The 27-year-old has undoubtedly been the star of the show at West Ham this season, where he is their current top goalscorer with nine goals and five assists from 37 appearances.

However, the winger limped off with a hamstring injury during the recent win over Swansea, and Bilic has since confirmed that he will miss the rest of the season.

As quoted by the club’s official Twitter account, the West Ham chief said: “It’s a significant injury and he’s out for the season.”

BILIC: "We are without @Michailantonio. It's a significant injury and he's out for the season. @Noble16Mark picked up a tenth yellow card."

Bilic did however, offer more positive news regarding the fitness of three of West Ham’s remaining injury concerns, ahead of the crucial Premier League clash with relegation rivals Sunderland on Saturday.

Again, a quoted by the club’s official Twitter account, he also confirmed that both Sam Byram and Andy Carroll could be fit enough to play an important role at the weekend, while full-back Aaron Cresswell was set to return to training on Thursday.

BILIC: "@sambyram93 got a little knock but he should be OK. @AndyTCarroll should be OK too and @Aaron_Cresswell returns to training today."

Byram had picked up a minor ankle knock during the Swansea victory, despite playing the full 90 minutes, but Bilic admitted he should be okay to feature in their next outing.

Fellow defensive asset Cresswell, meanwhile, has missed West Ham’s last two Premier League outings and will be back in training ahead of the weekend.

West Ham skipper Mark Noble will sit out the tie, however, after picking up his tenth yellow card of the season and will be serving a suspension.

The Hammers travel to the Stadium of Light hoping to put further distance between them and the relegation zone, having slipped to within just eight points of the bottom three.

In other West Ham news, Karren Brady has delivered a four-letter response to a West Ham fan about Bilic’s future.