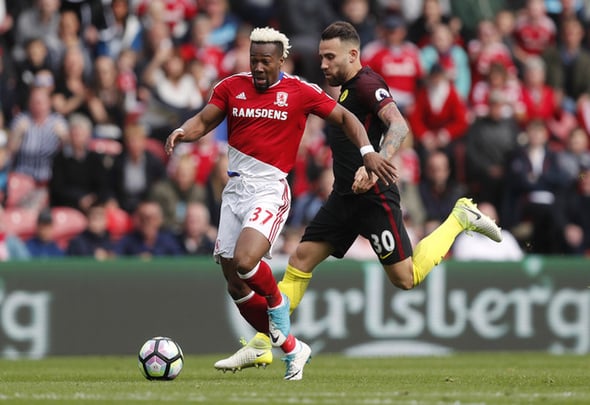 West Ham are closing in on the signing of Middlesbrough attacker Adama Traore after holding talks, according to a report.

Twitter account Read West Ham posted an image of the print publication of the London Evening Standard, claiming that the north east club are now ready to let the 21-year-old right-winger go for a fee “thought to be in the region of £8million.”

It is detailed in the report that manager Slaven Bilic has prioritised bringing pace into the club this summer and Traore showed during his time with Middlesbrough that he had that in abundance.

Now, co-owners David Sullivan and David Gold are looking to grant Bilic with his wish and it is claimed that the deal could soon be finalised with a medical still left to complete.

Traore began his career at Barcelona, making four first team appearances alongside scoring a goal before the Spaniard moved to England with Aston Villa in the summer of 2015 for a fee of £7million.

However, despite enjoying more first team football for the northern club, where he played 31 times in all competitions he suffered another relegation.

Traore still has three years remaining on his contract at Middlesborugh, but a move back to the English top-flight with West Ham could prove tempting.

Once considered a bright prospect at Barcelona for whatever reason it simply hasn’t worked out for him in England. However, his performances show that there is some talent there which initially gave him the up and coming talent tags. It’s just thought that a final ball is needed and then he will rise to the top. Current West Ham star Michail Antonio had similar issues at the beginning of his career, so if the Hammers manage to get Traore to start firing on all cylinders they could have another top talent lining up in their attacker.

In other West Ham transfer news, the Hammers are ready to make a decision on this £80,000-a-week player.