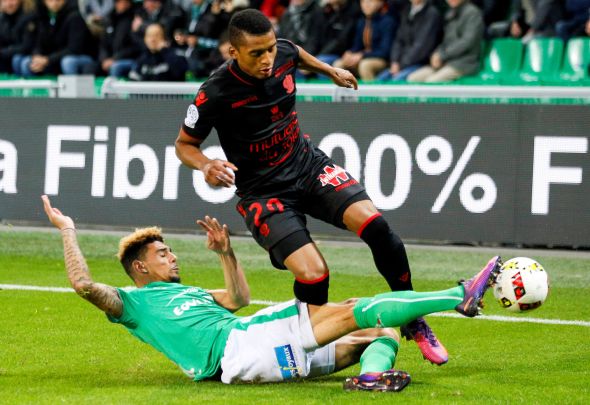 West Ham have not yet given up hope of signing Saint-Etienne defender Kevin Malcuit, according to a report.

The Hammers had two bids rejected by the French club for the 25-year-old’s services last month, the first reportedly at £7million and the second at £8.5million.

However, The Sun claim that West Ham are expected to continue their pursuit of the versatile Morocco international in the summer, and will up their offer to £10million.

Despite adding the experienced Jose Fonte to the club’s ranks last month, West Ham chief Slaven Bilic is set to continue his hunt for more defensive stability and a full-back is high on the agenda.

Bilic has seen his squad suffer from a lack of depth in the full-back positions this season, with a lack of sufficient cover for first-team duo Aaron Cresswell and Sam Byram.

The likes of Arthur Masuaku and Alvaro Arbeloa have both failed to impress and could be moved on in the summer, while winger Michail Antonio has often been forced to fill in at right-back.

Malcuit could be a decent addition to match Bilic’s preferred style of play, with his versatility also set to be a valuable asset.

The 25-year-old can operate on both sides of defence, as well as on the right-side of midfield. His exploits higher up the pitch have been rewarded with four assists from 27 appearances for the French club this season.

Bilic was keen to add another defender to his ranks in January but could not complete a deal in time, with Malcuit seemingly the preferred choice. The situation regarding the need for another full-back has not changed, and West Ham will be expected to continue their pursuit at the end of the season. Malcuit is adept at playing in both defensive and attacking areas and that would lend nicely to Bilic’s current system, options and long-term vision. The main concern, however, will be that several of Bilic’s foreign signings from last summer have all proven wasteful in the Premier League, and there is no clear indication that Malcuit would become a hit in England. With that in mind, despite his qualities, West Ham may be better off limiting their search to the top-flight, where there could be some decent options available in the summer.

In other West Ham transfer news, the Hammers have also entered the race to sign this highly-rated French defender, who is out of contract in the summer.