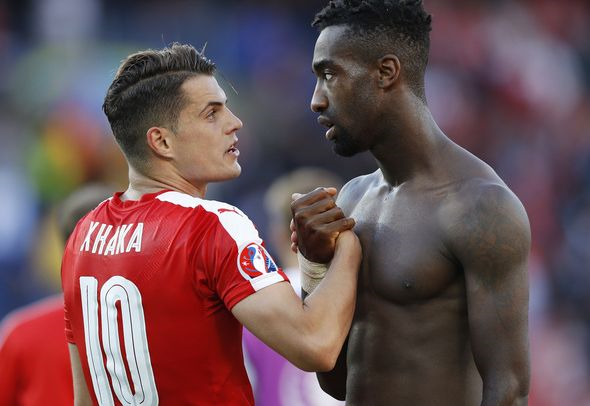 Slaven Bilic is looking to reinforce his defensive ranks at West Ham by bringing Hamburg star Johan Djourou to east London, according to a report.

German newspaper Bild claim that the Hammers tried to sign him in January, along with Premier League rivals Crystal Palace, but a move failed to materialise.

However, it is believed the Hammers are set to re-enter the market for the former Arsenal stopper, who is available to talk to non-German clubs over a pre-contract agreement.

A deal could see the 66-time Switzerland international move on a free transfer when his contract expires on June 30.

The Hammers are currently without Italy international Angelo Ogbonna who is suffering from a long-term knee injury, but do have James Collins, Winston Reid and Jose Fonte available.

Djourou has endured a frustrating season in the Bundesliga with Hamburg, making just 16 appearances in all competitions for Markus Gisdol’s side.

Losing his place to the likes of Mergim Mavraj, Kyriakos Papadopoulos and Douglas Santos, Djourou could be tempted with a return to the Premier League.

The experienced defender is just one appearance away from completing 100 outings in England’s top flight after spells with Arsenal and Birmingham, and a return would see him reach that landmark.

West Ham do not need Djourou. Bilic already has an abundance of central defenders available to him, with Fonte, Reid and Ogbonna all in the peak of their careers. With Wales international Collins acting as suitable back-up despite his growing age, the Hammers are also set to welcome back England youth international Reece Oxford at the end of the season from Championship outfit Reading. Djourou would struggle to displace any of those five players, and Bilic should instead look to strengthen other areas of his side. A striker and a right-back are desperately needed at the London Stadium, while Dimitri Payet is yet to be properly replaced.

In other West Ham transfer news, the Hammers are also reportedly in the market for this Norway international.