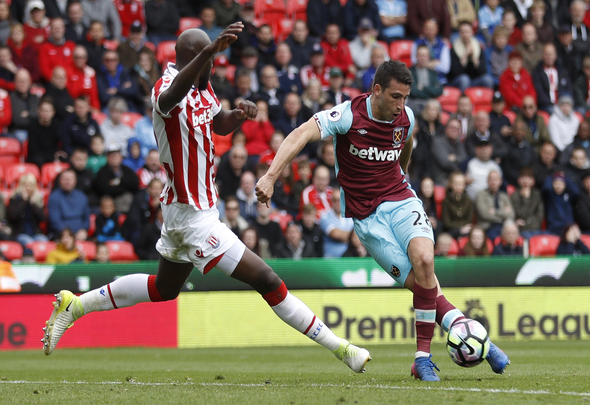 West Ham fans have taken to Twitter to destroy Jonathan Calleri for his dismal performance in the 0-0 draw with Stoke at the Bet365 Stadium on Saturday.

The 23-year-old had a number of chances to earn his side all three points and make progress towards finishing in the top half of the Premier League table.

However he showed terrible decision-making and composure as his side struck a blank in the Potteries.

The first came when he blasted the ball high and wide of Jack Butland’s goal, despite having all the time in the world to make a decent effort.

One of the biggest talking points came just before the break when he attempted a ‘Rabona’ kick at goal, when he would have been better off swinging his left foot at the ball.

Instead his attempt at the skill-shot failed miserably and Stoke cleared the ball in what was a game-defining moment.

West Ham fans have understandably slammed the striker for his stinker against the Potters, and here is a selection of their tweets:

Defoe would have scored the two chances Calleri missed in the first half. A striker who can instinctively finish costs us every game #WHUFC

Biggest question marks for me were regarding the noble for ayew substitution? Why not play ayew up top and drop calleri? 🤔 #whufc #slav

The mark of a South American footballer is always "but can they do it on a cold day in Stoke?" Think that might sum up Calleri #WHUFC #COYI

Calleri is Maiga in disguise #whufc

As much as I love Bilic you can't blame the board for sacking him if he keeps playing Calleri every week! Woeful. #stowhu #whufc #COYI

Calleri has made 17 appearances across all competitions for West Ham this season, scoring just one goal.

The fans will be relieved to know that he is likely not to be at the London Stadium after the summer as his loan stay from Deportivo Maldonado is set to end next month.

In other West Ham news, a reliable journalist has explained why this player was controversially substituted off against Stoke.