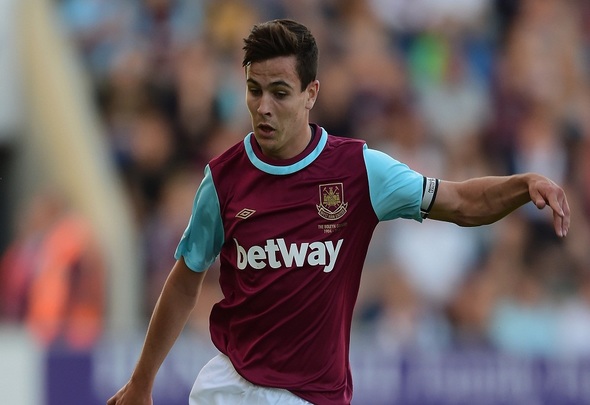 West Ham midfielder Josh Cullen will undergo dental surgery next week after seeing himself whisked to hospital at the end of the club’s FA Cup clash against Shrewsbury Town on Sunday.
The youngster, who was making his first appearance of the season for the Hammers, saw a tooth knocked out in a collision with Abu Agogo in the second half of the 0-0 draw, leaving the 21-year-old spitting blood but able to see out the 90 minutes.
However, manager David Moyes revealed after the clash that he had been taken to hospital immediately after the full time whistle, while also stating that Winston Reid had picked up a groin strain in the final minutes of the tie.
Despite the emergency medical attention, Cullen has revealed he is alright after the incident and will be available to feature in the club’s next games, despite the club’s official website confirming he will undergo root canal surgery imminently.
He told the Hammers’ website: “Two of my teeth need root canal treatment, which we will fit in around the games we’ve got coming up, and once my mouth calms down a bit.
“It’s being held in place by a splint across the front at the moment. The teeth are throbbing a bit, but I’m on painkillers so it’s not too bad, and I just want to get back to playing football. I’ll be fine!”
Cullen, who spent the first half of the season on loan with Championship side Bolton Wanderers, turning out 12 times for the Trotters, was making only his fifth senior appearance for West Ham since breaking through the youth ranks.
In other West Ham news, Alan Shearer and Ian Wright have slammed the Hammers’ display in the FA Cup.