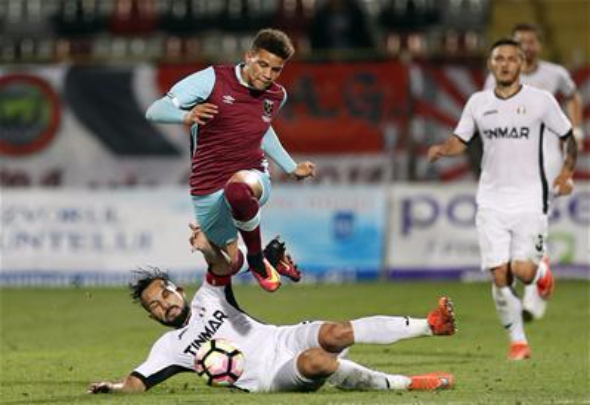 Forward Marcus Browne is on the verge of joining Wigan on loan from West Ham, according to a report.

Sports site HITC claim the Championship club are close to sealing a deal that will keep the 19-year-old Hammers academy product at the DW Stadium for the remainder of the season.

It is said that Wigan are in pole position to land the teenage attacker ahead of a number of other clubs who have expressed an interest.

Wigan manager regards Browne as a player who can play an important role in helping to maintain the second tier club’s Championship status.

The Lancashire outfit are 23rd in the table and three points adrift of safety as they prepare for Saturday’s Championship home clash against Brentford.

Browne recently agreed the terms of a fresh West Ham contract after developing impressively for the club’s Under-23s this season.

West Ham announced on their official website that Browne has signed a three-and-a-half-year contract that ties him to the club until 2020.

The teenager has yet to make his debut for the West Ham first team, although he has been named on the substitute’s bench.

But he has made impressive progress for the Under-23s this season and has appeared in all but one of the club’s Premier League 2 fixtures, with his 13 matches in the competition yielding three goals and three assists.

The youngster, who mainly plays in a secondary striker role, is one of the latest products of the prolific academy overseen by Terry Westley.

He has been at West Ham since the age of eight and has progressed impressively through the ranks, making a big impression for the club’s Under-18s and Under-21s before being one of the stars of the development side.

The West Ham senior side are 12th in the Premier League and preparing for Saturday afternoon’s long trip to Middlesbrough.

They will once again be without Dimitri Payet after he went on striker to force his exit from the club.