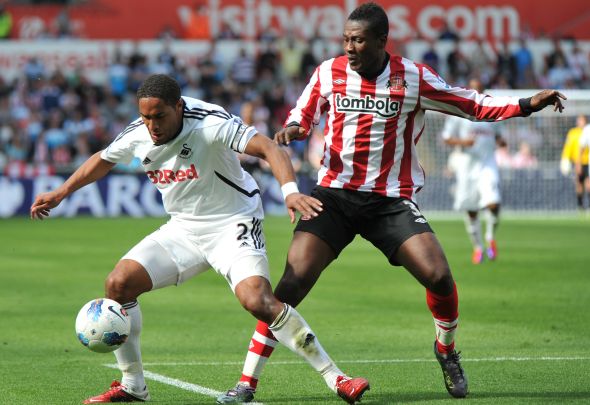 Former Sunderland striker Asamoah Gyan could be set for a spectacular return to the Premier League, according to a report.

West Ham are keen to sign the Ghana captain after he was granted permission by Chinese side Shanghai SIPG to leave the club in a loan move.

Goal claim that West Ham are leading the chase for the former Sunderland striker.

“We have spoken to the club about a loan move for Gyan and they have agreed,” Addo said, as quoted by Goal.

“There are so many offers on the table but as we have always done we will look at the offers and check what best suits Gyan and decide on what to do.”

As well as England and China, Gyan has had spells in Italy, Qatar and France and would bring a wealth of goalscoring experience back to these shores if he is to join the Hammers.

Signing for a club-record £13million, Gyan scored 11 goals on Wearside in all competitions during his first season, before opting to move to Qatar for a much more lucrative contract.

Gyan, who is just five caps away from making 100 national team appearances, has struggled with injuries recently and has fallen down the pecking order after the signing of Brazilian Hulk.

In other West Ham transfer news, manager Slaven Bilic has given this update on two other striker targets.