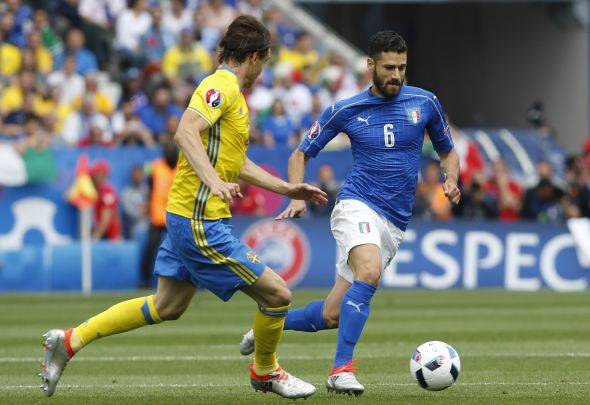 Lazio winger Antonio Candreva is set to join Napoli despite interest from other clubs, according to his agent.

Candreva has been rumoured as a target for Premier League pair West Ham and Chelsea as he looks to leave Lazio this summer.

Czech football website eurofotbal.cz claims West Ham have been interested in the 29-year-old for a long time, but Napoli, Chelsea and Inter Milan have been ahead of them in the pursuit.

In an interview with Italian TV network Mediaset Premium, agent Federico Pastorello claims there has been a deal agreed between Lazio and Napoli and Candreva is pushing for the move to Naples to go ahead.

“Lazio and Napoli have an agreement, the player likes the destination and we requested personal terms,” Pastorelli told Mediaset Premium.

“We only found out that Lazio and Napoli have an agreement on Thursday and the player likes the destination.

“Now we have made our request for personal terms and will see what happens, taking into account that there are other previous negotiations.”

The other previous negotiations referred to by Pastorello were interest from Inter,  Chelsea and West Ham.

The winger impressed at Euro 2016 for Italy and Napoli are ready to pay £24million including bonuses.

Since joining Lazio the Italian has been a massive hit in Serie A, and scored 10 goals in 30 league games this season with a further four assists.

Sky Sport Italia note that the deal isn’t over yet, and Chelsea are still keeping an eye on the deal while contemplating a new offer if current talks break down.

In other West Ham news, they have agreed a mega fee for an attacker as summer signing number six is finalised.