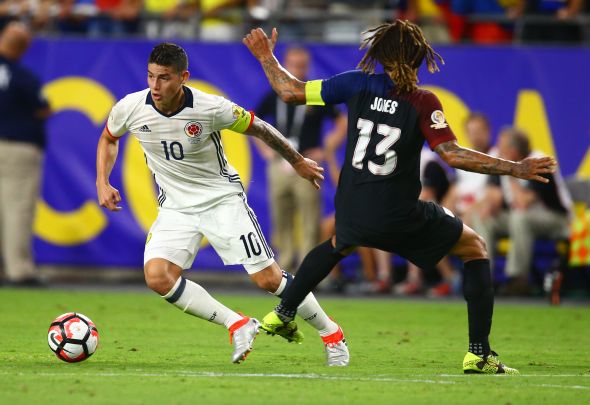 West Ham have joined Manchester United and Chelsea in the race for Real Madrid playmaker James Rodriguez, according to a report.

The Colombian moved to Real Madrid from Monaco for around £63m two years ago after starring at the World Cup, where he finished top scorer with six goals.

Spanish publication Marca claim Rodriguez is unsure how he fits into Zinedine Zidane’s plans after slipping down Real’s pecking order last season and would consider a move if his £67million price tag is met.

It is said that West Ham are flighting with United, Chelsea and French giants Paris Saint-Germain for Rodriguez but the highest offer on the table to date is £50million, £17million short of Real’s valuation.

Rodriguez is preparing for the new season with Real off the back of a fine showing for his national side at the Copa America.

The report says Rodriguez is settled in the Spanish capital but wants to be as important for his club side as he is for his country.

He played just 26 times for the Spanish giants in the most recent season, scoring seven times, but was behind attacking trio Cristiano Ronaldo, Gareth Bale and Karim Benzema in the pecking order.

In other West Ham transfer news, a new swoop has meant the latest twist in their deal for an £11million attacker.