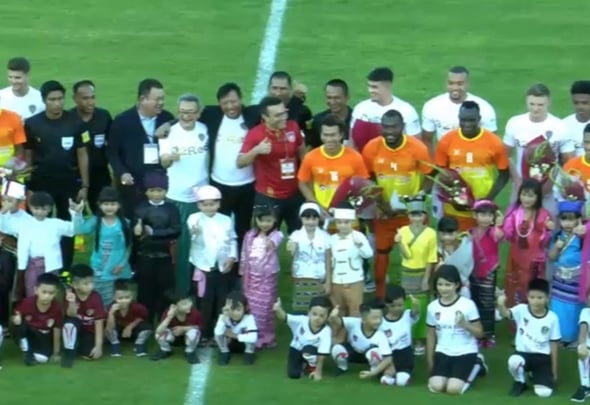 Leeds United have taken a lot of stick over their tour in Myanmar, and things didn’t get any better for them once the action started.

In 33C heat and 62% humidity, the conditions were pretty awful for a game of football and Leeds responded by going a goal down Myanmar All Stars.

They scored in the 22nd minute through Joseph Mpande of Hantharwady United, and Leeds fans couldn’t believe how low their side had sunk.

At a time when they were hoping to be eagerly anticipating the play-offs and a shot back into the Premier League, they’ve found themselves watching a friendly in a war-torn country.

This renewed Leeds fans’ calls for Paul heckingbottom to go, but they did receive something to cheer about when Samu Saiz equalised from the spot.

However, that was short-lived as Myanmar retook the lead early in the second half through another penalty.

The game is still ongoing Leeds have around 30 minutes left to salvage something.

Oh dear! Leeds are now losing against the Myanmar 11! Looks like we’ve found ourselves a new continent to lose in. Well done lads. #LUFC pic.twitter.com/Ca9Vw23PN7

#LUFC did Lonergan stop himself getting in the way of that?

In other Leeds news, ‘Sorted’, ‘Real signal of intent’ – Leeds fans react to reported update on move for 6ft 4 giant