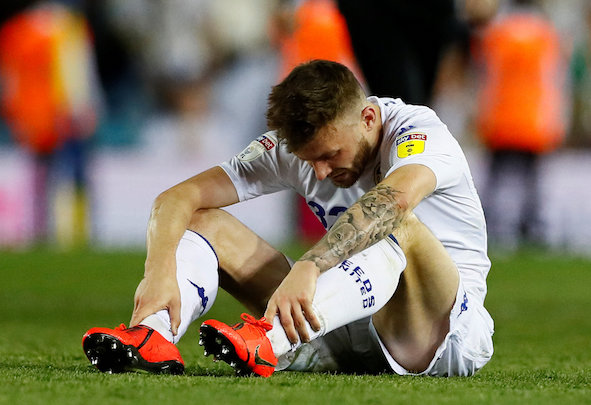 Noel Whelan has revealed how Stuart Dallas was left “broken” by Leeds United’s last-gasp defeat to Swansea City on Saturday.

Speaking exclusively to Football Insider, the ex-United forward explained how the Northern Ireland international’s deflation summed up the mood at Elland Road.

Wayne Routledge struck in the 90th minute to maintain Swansea’s unbeaten start under Steve Cooper and inflict Leeds’ first defeat of the season.

Marcelo Bielsa’s side head into the international break third in the Championship after also being usurped by Charlton Athletic.

“I spoke to Stuart Dallas after the game and he was absolutely deflated and broken by the manner of the defeat,” Whelan told Football Insider. “He couldn’t believe they lost.

“You could see when the players left the pitch how down they were. I know it’s early in the season but it was a big game – first against second – and psychologically a win would have been huge.

“If you don’t take your chances, and Leeds had 21 in total, football has a habit of biting you in the backside.”

Dallas has started all six of Leeds’ Championship matches this season after being converted from a winger into a right-back.

The experienced campaigner, 28, has made a success of his new role after a pre-season ankle injury sustained by Luke Ayling.

In other Leeds United news, Whelan has shared his fears about Bielsa’s treatment of Whites ever-present that he considers a “massive issue”.