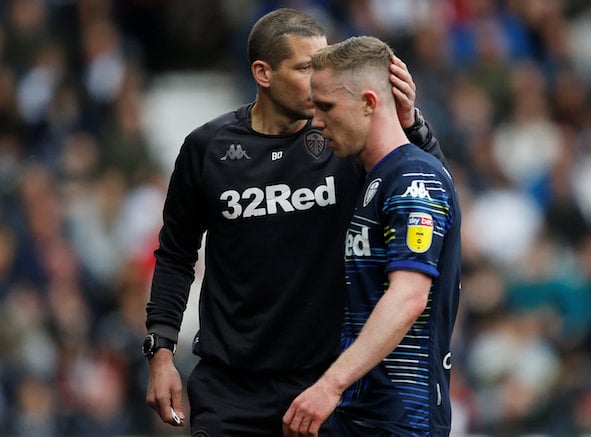 Leeds United midfielder Adam Forshaw could be the perfect fit for Championship rivals Fulham as talks begin over a move to Craven Cottage, according to Noel Whelan.

The former Elland Road striker exclusively told Football Insider that he saw mistakes start to creep into the 27-year-old’s game during the 2018/19 season and that a move away from the Whites could be in his best interests.

As exclusively revealed by Football Insider, talks have taken place between Leeds and Fulham over a permanent switch for the midfielder as the Cottagers look to bolster their midfield.

Whelan says that the former Middlesbrough man has failed to live up to expectation in his year-and-a-half at Elland Road and that while he has great talent in the middle of the park, the move might not have been right for either party.

He told Football Insider: “He hasn’t lived up to expectation. He’s been in and out of the side last year with Leeds. He was a player who was highly spoken about by Middlesbrough but obviously they let him go for a reason as well.

“I think Adam’s got fantastic ability, the way he retains the ball, his passing, we needed a little bit more from him last season. A couple of mistakes crept into his game passing-wise, a bit of slackness.

“If he does go to Fulham then he’s going to a very good side, isn’t he? Maybe they see him as a perfect fit. Maybe he wasn’t for Leeds.”

Of his outings for the Whites, 32 came in the 2018/19 campaign, although he only managed 19 starts as injury curtailed his season.