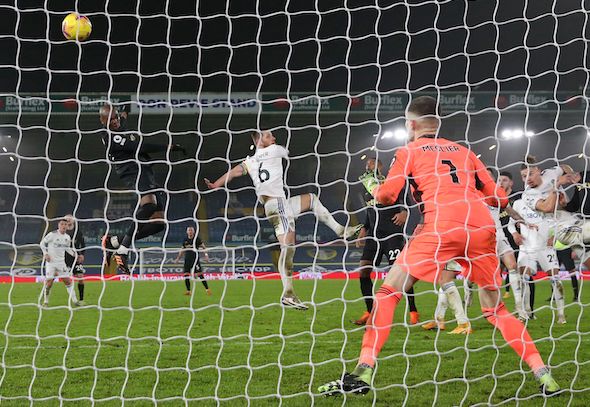 Leeds United will continue to struggle to overcome Premier League sides if they do not address their “weakest link” of defending set pieces.

That is according to ex-United striker Noel Whelan, speaking exclusively to Football Insider after the side’s 2-1 defeat to West Ham on Friday night.

Leeds took the lead through a controversial re-taken Mateusz Klich penalty but were pegged back by a headed equaliser from Tomas Soucek before Angelo Ogbonna climbed highest to nod in an 80th-minute Aaron Cresswell corner.

It was the seventh goal Marcelo Bielsa’s side have conceded from set pieces this season, the joint highest in the league with Leicester City.

“We are playing some brilliant football and it’s so good to watch, huge credit to Bielsa for that,” Whelan told Football Insider.

“We’re giving every team in the league a run for their money, but it’s going to be very difficult to climb the league and close down these games if we don’t tighten up on defending set pieces.

“It’s our weakest link. We’ve conceded the most goals in the league from set pieces and that needs to be addressing by drilling and practice on the training ground.

“We’re not the biggest side anyway and West Ham are a huge one. But they know how to score against us, and that makes it too easy for these top sides.

“We’ve spent a lot of money on new centre-back and they’re out injured for a long time. So it comes down to practice.

“Otherwise it will keep happening and we will keep getting embarrassed on set pieces.”

In other news, Leeds United are closing in on a big-money deal after proven star reveals his “love” for the club.