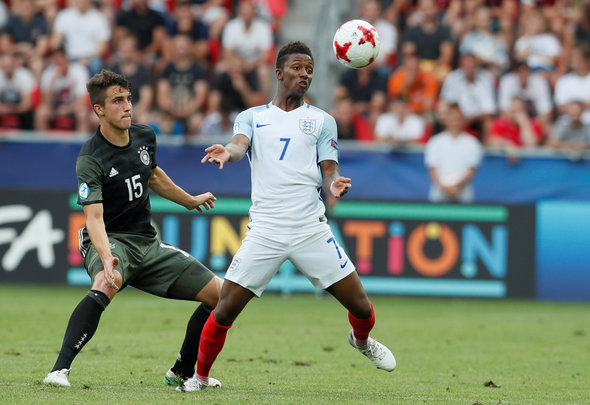 Demarai Gray has revealed he is “not happy” at his lack of game time at Leicester following a series of failed bids for him last week.

Sky Sports Italy journalist Gianluca Di Marzio has claimed on his personal website that Tottenham tabled a stunning £25million offer for the forward shortly before the transfer deadline, and there was also similar reported interest from Bournemouth.

It is said that Leicester slapped a £30million valuation on the 21-year-old, who has struggled to nail down a first team spot at the Premier League club.

Gray reminded manager Craig Shakespeare of his immense potential with a goal for England Under-21s on Tuesday but his muted celebration was a reminder of his itchiness at club level.

“You saw I am frustrated at the amount of football I am getting,” he told the Times. “The reason I didn’t look so happy is because I am so frustrated. I want to play every week.”

Gray said “there were a few bids flying around” on deadline day as he explained that Leicester have a firm plan for his development.

“They sat me down and told me how they are going to use me,” he added to the Times. “Personally, I am not happy with the amount of football I am playing. I get so frustrated when I don’t play. I am not just going to sit there and say nothing. If I was that would be an issue.”

Gray made 43 appearances across all competitions last term for Leicester, scoring three goals and supplying six assists in the process, although most of his game time came off the bench.

His only league time this season has come as a substitute.

Spurs are lacking a turbo-charged attacker with pace to burn. Could Gray be that player in the futurre? An England international in the making, he was the outstanding player for the Under-21s this summer, but has found game time at Leicester harder to come by than he had hoped. Under the shrewd guidance of Mauricio Pochettino and playing alongside the likes of Harry Kane and Dele Alli, he could fast-track his development and provide Tottenham with a much-needed speed machine.

In other Tottenham news, the club have been hit by a devastating blow as a key first-teamer has been sidelined until the new year.