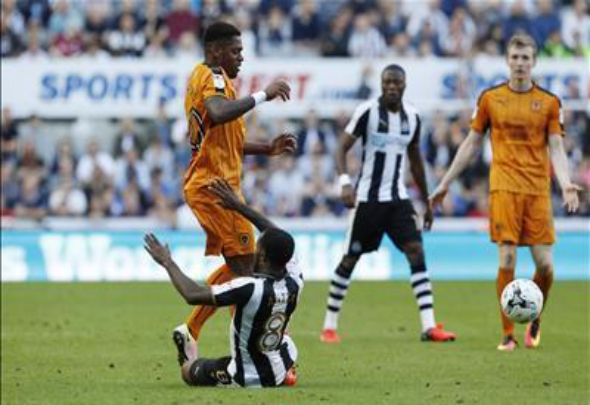 Wolves fans have reacted on Twitter as Ivan Cavaleiro failed to impress, despite securing a 2-1 win against QPR on Thursday night.

The 23-year-old star failed to impress from the left side of the Wolves attack, as Paul Lambert’s new side struggled to find an attacking punch in the final third despite the win.

A club-record signing from French giants Monaco for £7million, Cavaleiro showed only glimpses of quality as he looked to take on the QPR defence with his quick pace and dazzling footwork.

Fans will be encouraged that their number 50 got into a number of promising positions, but Lambert could now be tempted to start George Saville against Fulham next weekend after he replaced the Portuguese star in the 71st minute.

Wolves fans reacted on Twitter with disappointment, as Cavaleiro failed to adapt to the rigours of the second tier of English football.

Not difficult, get the ball wide to Costa and Cavaleiro. #wwfc

Cavaleiro needs to stop being so selfish. That's the fifth time he's been caught in possession or not passed to an open player.

Cavaleiro has made 13 appearances for the Midlands giants this term, scoring just once despite his hefty price tag.

Formerly of Deportivo and Benfica, Cavaleiro will be hoping to improve his form at Wolves ahead of the busy Christmas period.

In other Wolves news, Lambert has revealed his January transfer plans with less than a month until the winter window.