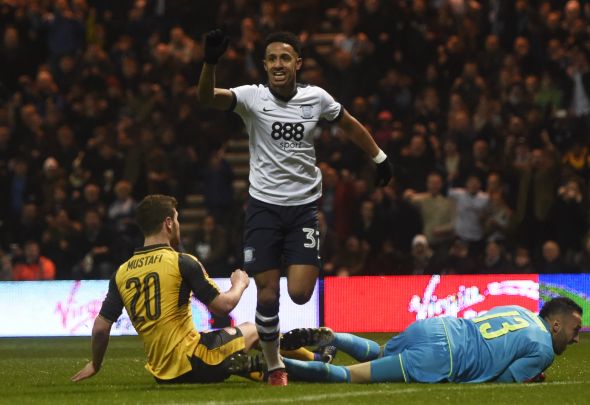 Wolves are set to rival Fulham and Cardiff to sign Preston’s Callum Robinson in a deal worth £2million, according to a report.

The Daily Mail claimed on their transfer news blog (January 24, 10.57am) that Wolves boss Lambert will look to form a reunion with Robinson after their time together at Aston Villa.

However, Lambert will have to fend off interest from both Fulham and Cardiff if he is to sign the 21-year-old forward, who has starred since moving permanently to Preston.

Wearing the number 37 shirt, Robinson has had a hand in 10 goals in all competitions this season during his 29 league and cup appearances.

Scoring seven times against the likes of Brighton, Arsenal and Blackburn, Robinson has also turned provider on a further three occasions.

Robinson’s form with Preston under Simon Grayson has seen the Lilywhites defy pre-season expectations of a relegation battle to sit in a lofty 11th place and just five points off the playoffs.

With a contract until the summer of 2019, it will take some convincing by Lambert to persuade Preston boss Grayson to sell the six-time England Under-20 international.

Bringing in Robinson from Preston could mean that Lambert’s side have finally given up in their month-long chase for Blackburn star Ben Marshall. The two sides have argued throughout the window over a transfer fee for Rovers’ number 10, with Owen Coyle’s side holding out for more money despite the former Leicester ace’s contract expiring in the summer. However, bringing Robinson to Molineux could see Lambert cool his interest in Marshall, as he tries to bolster his options on the flanks. Signing Robinson would prove a shrewd piece of business considering his form in the second tier of English football.

In other Wolves transfer news, Lambert has also made this enquiry for another Championship winger.

Exclusive: Danny Mills claims £80m+ Wolves deal may be on the cards

Exclusive: Alan Hutton reveals he was ‘Frightened’ of Wolves man