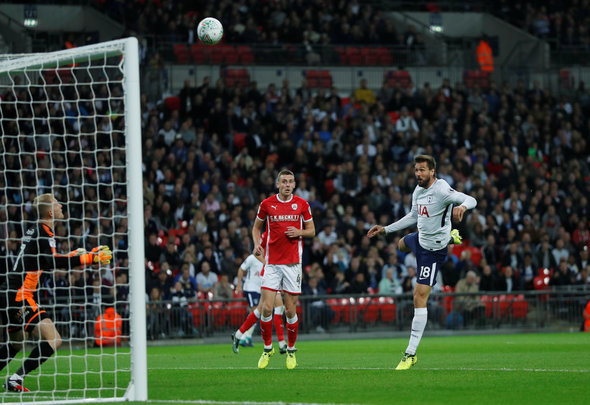 Mauricio Pochettino has spoken positively on new Tottenham signing Fernando Llorente, explaining he “works like a champion” and is a “top professional.”

The 32-year-old made the switch to north London on the summer’s transfer deadline day from Premier League rivals Swansea for an undisclosed fee.

He joins with a huge reputation having played for the likes of Juventus, Athletic Bilbao and Sevilla over his career, while also winning 24 caps for the senior international Spain squad.

Now, manager Pochettino has explained that even at his age Llorente is still hungry to fight for his place in the Tottenham team, describing his workmanlike attitude as a “champion.”

“He works like a champion,” told Pochettino in his press conference, as quoted by Football.London.

“He is a top professional and never this type of player asks you about minutes. How they behave is they work hard, try to convince the manager and show they deserve to play. This type of player will never knock on your door and say, ‘I want to play more’.”

Llorente has had an illustrious career which has seen him win the Serie A title three times alongside single Europa League, World Cup and European Championship winner medals.

He will now be hoping to continue his success at Spurs, who have had consecutive third and second place finishes in the Premier League table.

The forward has already made three appearances for Tottenham, including one start in the midweek cup clash against Barnsley and while he has remained goalless he will be hoping to get on the scoring charts against West Ham on the weekend.

In other Tottenham news, Slaven Bilic has explained what the Hammers must do to stop Spurs.