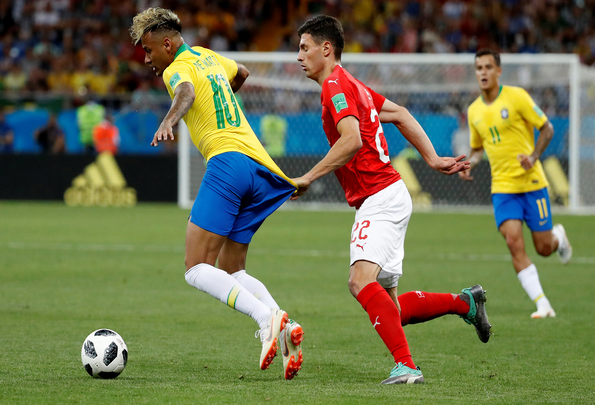 Celtic are linked with players almost every day, and one of the latest to be mentioned in dispatches was Switzerland and Deportivo La Coruna centre-back Fabian Schar.

The 26-year-old, who is currently at the World Cup in Russia with his national side, was linked with a move to the Hoops by Spanish football website Eldesmarque.

But it has been denied by the club on the Daily Record transfer blog on Wednesday morning (10:52).

The centre-back, who played the entirety of Switzerland’s recent World Cup draw with Brazil, had an excellent game against one of the favourites for the World Cup.

His no nonsense style looked ideal for the Hoops, and he could have fit in well with the likes of Dedryck Boyata and Kristoffer Ajer.

But the fact that the Hoops have came out and said they are not interested in signing the player should quickly out an end to any rumours about the defender.

Indeed, it would seem unlikely that Brendan Rodgers will pursue any more centre-backs until the situation with Boyata’s contract is resolved.

Once the Hoops know if the 27-year-old plans to stay with club, the their defensive transfer plans for next season will become clearer.

But until then, fans will just have to wait and no doubt there will be plenty more rumours about centre-backs moving to the Scottish champions in the weeks ahead.

In other Celtic news, the Hoops have been linked with an SPFL defender