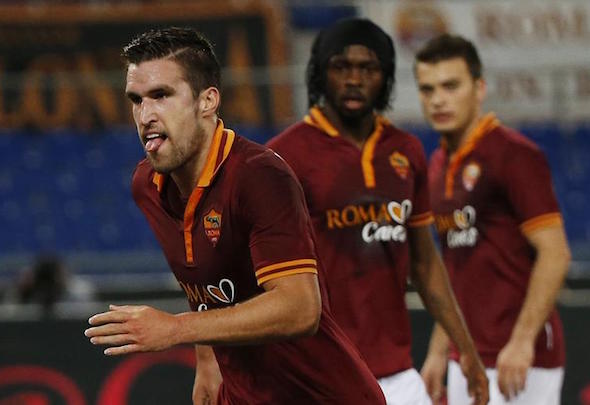 Kevin Strootman has been ruled out of Roma’s Champions League showdown against Liverpool tomorrow night (Wednesday), according to manager Eusebio di Francesco.

The Giallorossi boss explained at his media conference on Tuesday, as quoted by the official English-language Roma Twitter account, that there is no chance of the Holland international recovering from a leg injury to play in the second leg.

Di Francesco: “I’ll weigh things up today as far as the line-up goes. Our approach will have to be spot on both defensively and in attack. As for injury news, unfortunately it’s hard to see Kevin Strootman being involved.”#ASRoma #UCL #RomaLFC pic.twitter.com/QxBC6HQpzB

Liverpool head to Rome with a 5-2 advantage from the first leg at Anfield last Tuesday and are well placed to secure a place in the final in Kiev on 26 May.

Yet another big-name midfielder is ruled out of the mouthwatering showdown at the Olympic Stadium. Jurgen Klopp revealed earlier today that key trio Emre Can, Alex Oxlade-Chamberlain and Adam Lallana are not available for selection, with Liverpool also down to the bare bones in the central midfield battleground and left with little option but to go with James Milner, Jordan Henderson and Georginio Wijnaldum. Strootman is similarly important for Roma after overcoming the series of serious injuries that disrupted his career in his mid-20s. He has been one of Roma’s most influential players this season, with his 42 appearances in all competitions including 11 in the Champions League. Like his teammates, Strootman couldn’t cope with Liverpool’s energy, intensity and counter-attacking brilliance for much of the first encounter, but he was important to their final-10-minutes comeback at Anfield. The Holland international’s experience and pedigree will be sorely missed tomorrow.

In other Liverpool news, the club have one mega deal worth £47million bagged (not Naby Keita) and two more monster signings bagged in shattering triple swoop.