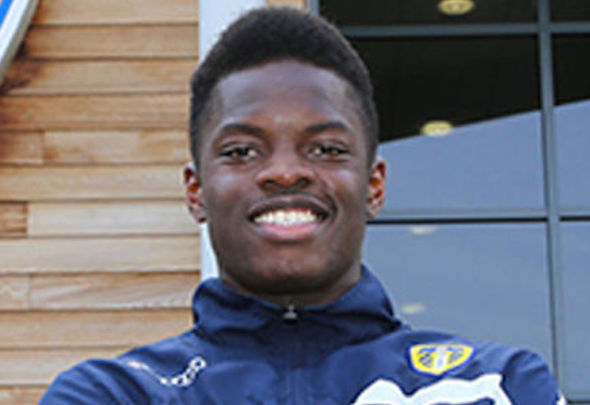 Leeds will tie a number of young guns to new contracts this summer, the club have revealed.

The 17-year-old Academy star has penned a two-year deal which comes into effect on 1 July.

Leeds revealed that the Guinea-Bissau-born central midfielder will not be the only player to graduate from the Academy to the senior set-up in the coming weeks.

Vieria has become “the first of a number of young players set to extend their stays at the club over the summer,” said the club in a statement on their official website.

Vieira, who initially joined the Yorkshire giants on scholarship terms after arriving from York’s i2i Football Academy, has been a regular for Leeds’ youth teams this season.

Meanwhile, Charlie Taylor has revealed he would like to sign a new Leeds contract amid fears he could follow Sam Bryam by running down his contract and leaving.

The left-back was crowned as Leeds’ player of the year at the club’s end-of-season awards night following last Saturday’s home game with Charlton.

Taylor, who suffered with glandular fever earlier in the campaign, has established himself one of the Championship’s premier left-backs alongside the likes of Middlesbrough’s George Friend and Hull’s Andrew Robertson.

However, there are growing fears about Taylor’s long-term future at the club, as the 22-year-old is entering the final year of his Leeds contract and supporters fear another Byram situation.

The former Leeds right-back had just six months remaining on his deal when he joined West Ham for £3.75million in the January transfer window.

Speaking to BBC Radio Leeds this week, Taylor insisted he would like to remain at Leeds this summer and push for promotion next season.

“Obviously I’d like to stay at Leeds and I want us to have a real good push and challenge for promotion next year,” he said. “I think with a couple more signings, a few more things done behind the scenes, there’s no reason why that’s not too much to ask for.”

Taylor, who has been linked with a move to Crystal Palace, is regarded as one of Leeds’ emerging stars along with Lewis Cook, 19, and Alex Mowatt, 21.

“Hopefully I’ll still be here and Cooky and Mowatt,” he told BBC Radio Leeds. “I just leave it down to my agent and the club really and like you say hopefully it can get sorted out.”

Cook is about to enter the final year of his deal while another Leeds youngster, 19-year-old goalkeeper Bailey Peacock-Farrell, is out of contract in the summer.

In other Leeds news, manager Steve Evans has said the club can gain promotion next season on three conditions.