Danny Mills has revealed Marcelo Bielsa has settled into life in Leeds to such an extent that he has joined a dog-walking group in Wetherby.

The Argentine’s future at Elland Road is up in the air if Leeds United miss out on promotion this season amid speculation he could leave the club this summer.

Speaking exclusively to Football Insider, ex-United and England defender Mills shared a revelation about Bielsa that strongly suggests a growing attachment to the city and the club.

“I’d be very, very surprised if there are some Premier League sides that don’t come knocking on his door, saying ‘look, we love what you’ve done,” Mills told Football Insider. “But maybe he just likes the challenge, maybe he likes living where he’s living.

“Bizarrely he turns up to a dog walking group just outside Wetherby, doesn’t speak a word of English, turns up with a group of dog walkers, predominantly women, and just walks his dog.

“He’s a different character but you’ve got to love him for that. He’s not interested in what other people think. He’s just happy in doing what he wants to do so maybe, with that in mind, he might stay at Leeds but I’d be surprised if there aren’t other interested parties.”

Bielsa signed a two-year contract when he joined last summer although the second year is activated only if the club take up their option to do so.

This is triggered automatically if Leeds are promoted this season, although that possibility hangs in the balance after they missed out on a top-two finish.

United will finish third if they secure at least a point against bottom club Ipswich Town on Sunday and face the sixth-placed club – one of Derby County, Middlesbrough or Bristol City – in the end-of-season Championship play-offs. 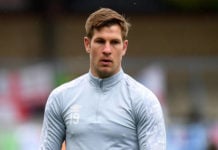