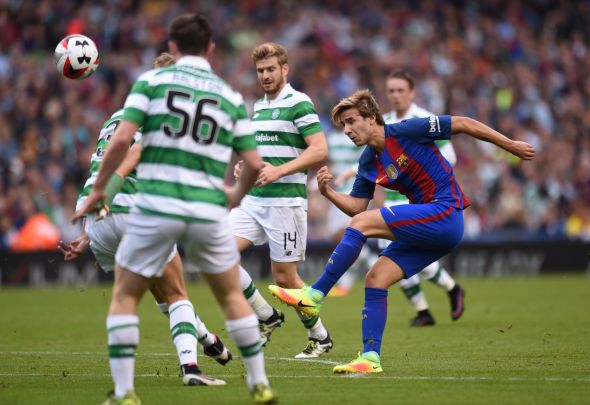 Barcelona ace Sergi Samper has revealed that he rejected an approach from Arsenal boss Arsene Wenger in the summer.

Instead, the 21-year-old opted to join La Liga side Granada on loan in order to gain first-team football rather than move permanently away from his boyhood club.

Speaking to Spanish outlet Sport, Samper revealed that he did not even listen to the Gunners manager as he is happy with Luis Enrique’s Spanish champions.

“I did not want to even listen to Wenger,” he said.

The La Masia academy product, who is rated as one of the hottest prospects to come through the highly-esteemed youth setup, has starred in Granada’s midfield this season.

Wearing the number four shirt, Samper has sat at the base of the midfield and has been a rare shining light in a side that have struggled to form any kind of consistency.

Granada are currently 19th in the La Liga, with just one win to their name and six points adrift of top-flight safety with Valencia in 17th on 16 points.

But Samper, who has a contract with Barca until the summer of 2019, has his sights firmly set on breaking into Enrique’s first team.

Arsenal have missed out on a top talent in Samper, a player who definitely had the potential to break into the Gunners’ first team with Francis Coquelin failing to form any kind of consistency. Although a major positive that Wenger is looking to sign a player that has bags of potential, it is perhaps disheartening that a move to Arsenal is considered unappealing to Samper despite the likes of Cesc Fabregas and Hector Bellerin moving to north London at a young age. Fans may become to rue missing out on Samper in years to come, as he continues his rapid rise to stardom that could see him break into the star-studded Barca side in the near future.

In other Arsenal transfer news, fans have reacted on Twitter to the news that Wenger has secured a one-year deal with this defender.