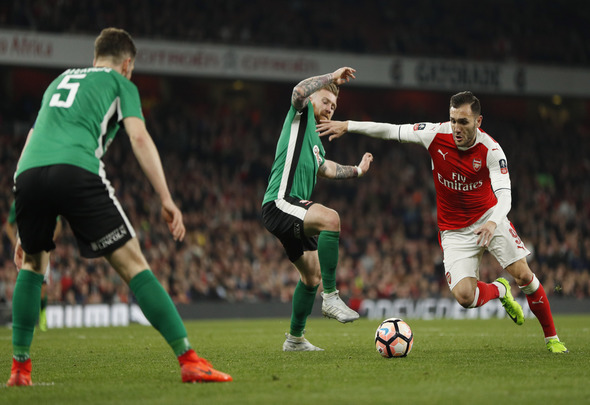 Arsenal booked their place in the FA Cup semi-finals with a 5-0 win over non-league Lincoln.

The first half was uncomfortable to watch for Arsenal supporters though as it took them 45 minutes to open the scoring through Theo Walcott.

Olivier Giroud, a Luke Waterfall own goal, Alexis Sanchez and Aaron Ramsey rounded off the victory in the second half where they join Manchester City in the bag for the semi-final draw.

However it wasn’t exactly plain sailing for the Gunners and here, Football Insider takes a look at the three worst performers from the win.

You’re five goals up against a non-league side and you decide to dive to try and win a penalty. The 28-year-old made an embarrassing attempt to try and con the official and really showed his colours when he threw himself to the floor in the closing stages of the game. The striker has had limited chances to impress this season and it may have been his frustration that showed when he decided to try and cheat. He didn’t get a yellow card from the referee but he definitely should have. He makes this list solely for that one unfortunate moment.

Despite scoring a goal, Giroud is a France international, who is a double FA Cup winner, a Ligue 1 champion and a European Champions runner-up and he had an absolutely torrid game against a non-league side – just let that sink in for a moment. Giroud was woeful and was completely marked out of the game by the Lincoln defence. He cut a frustrated figure all game and was nowhere near the level that was expected of him before a game which he should easily have smashed a few goals. His goal was through no hard work of his own as Hector Bellerin played a great cut-back straight to the striker, who looked glued to the spot, and all he had to do was knock the ball into a near-empty net.

It doesn’t matter who he’s playing against, Xhaka just cannot control his discipline as he was booked for the eighth time this season. It wasn’t just his tackling that was the issue as he was very poor on the ball in the second half and offered absolutely nothing to his side who struggled for 45 minutes to make a breakthrough. Arsene Wenger saw sense to replace the Swiss international in the second half as he was correct to be worried about him picking up his third red card of the season. There’s no harm in being physical but there was just no need for it on Saturday against an inferior opposition.

In other Arsenal news, a Sky Sports pundit has said where the Gunners would finish without Alexis Sanchez.