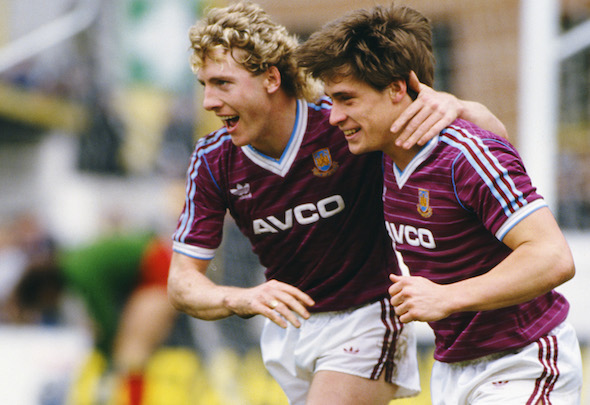 Frank McAvennie has urged West Ham to sign an out an out goalscorer this summer of the likes of his former strike partner Tony Cottee or Jermaine Defoe.

The former Hammers striker, speaking exclusively to Football Insider correspondent Dylan Childs, insisted that “6ft 3in lightweight” Sebastien Haller, 26, was not the answer to the club’s woes in front of goal.

The club-record signing has missed the first two games of the Premier League restart with a hip injury and is unlikely to face Chelsea on Wednesday.

Despite a promising start to life in London the striker has failed to meet expectations since his arrival from Eintracht Frankfurt last summer.

McAvennie claimed that the former France Under-21 international did not have the eye for goal or physical presence needed to succeed in England.

“I do not see Haller being the saviour,” he told Football Insider. “He is 6’3” but he is a lightweight.

“At least Antonio puts himself about and that is what you have got to do as a striker. He was great against Spurs. He held it up and once he came short, spun and blasted it over the bar – but why do they not do more of that?

“I would like to see they buy an out and out striker in the summer. Somebody who can score goals.

“A Tony Cottee or a Jermaine Defoe – someone like that who scores goals. They have not got that.”

Haller has scored seven goals in 29 appearances for the Hammers in all competitions this season.

Michail Antonio has been trusted to lead the line in the Frenchman’s absence but David Moyes’s side have failed to score in both games.