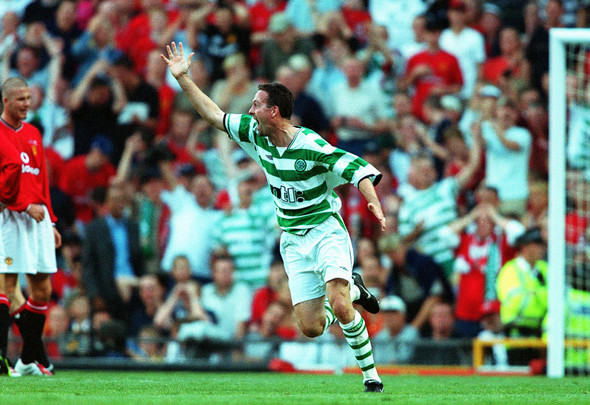 Gabby Agbonlahor has tipped the new Celtic manager to sign his own captain to replace the outgoing Scott Brown.

Speaking exclusively to Football Insider, the ex-Aston Villa and England striker pointed to his own experiences with ex-Hoops midfielder Paul Lambert at Villa Park when he signed Ron Vlaar.

Brown will leave Parkhead in the summer after 14-years of service to join Aberdeen in a player/coach capacity.

A trophy every 28 games for our Captain, Leader, Legend 🍀

The 35-year-old has been Celtic captain since 2010 and led them to nine consecutive Scottish Premiership titles.

Eddie Howe is the current favourite to be the next Celtic manager after he reached a verbal agreement with Dermot Desmond last week.

However, Football Insider understands the Glasgow giants are concerned he is having second thoughts as he is yet to put pen to paper on their “wonderful” offer.

Asked whether the new manager will want to sign their own captain, Agbonlahor told Football Insider correspondent Connor Whitley: “1000 per cent.

“Paul Lambert did it when he came to Villa, he brought his own captain in, Ron Vlaar.

“Managers do that. Whoever is big enough to take on that job will be for sure looking to change a lot of things and bring in their own players.”

Speaking on his move away from Glasgow to BBC Sport, Brown admitted the uncertainty over the next manager prompted him to be “selfish” and join Aberdeen.

He explained: “For me to have that fresh start with someone I know, trust and respect fully, or be sitting at Celtic until the end of the season not sure what to do or who’s coming in, that played on my mind.”