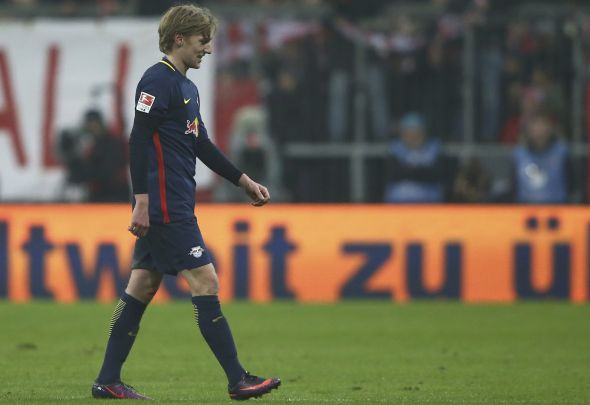 Emil Forsberg’s agent has revealed that a number of clubs have made enquiries over the availability of his client after Liverpool were reportedly interested in the attacker.

The Daily Mirror claimed on Monday that Liverpool were eyeing a move for the £20million-rated RedBull Leipzig forward, after missing out on Borussia Dortmund’s Christian Pulisic.

Talking to German newspaper Bild, agent Hasan Cetinkaya revealed that a number of “big clubs” have approached him over the possible signing of Swedish international Forsberg.

“I can’t confirm names,” Cetinkaya said. “But after the great first half of the season, big clubs have reached out to me.

“RB are on a good way to become a big club, which plays in Champions League soon. In spite of that I can’t promise that Emil will stay in Leipzig this winter.”

The former Malmo ace has caught the eye in RB Leipzig’s ambitious side, as they continue to blow away their pre-season expectations of a relegation dog fight by challenging Bayern Munich for the Bundesliga title.

Despite only getting promoted to the top tier of German football last year, Leipzig sit just three points off Carlo Ancelotti’s side in second place.

Forsberg, who signed for Leipzig in the summer of 2015, has been instrumental in providing the firepower behind Leipzig’s title charge with five goals and nine assists in just 16 league and cup appearances.

Able to play in the number 10 role, out wide or as a centre-forward, Forsberg could be brought in to replace Africa Cup of Nations-bound Sadio Mane.

In other Liverpool transfer news, the Reds are set to complete a loan move for this midfield ace.