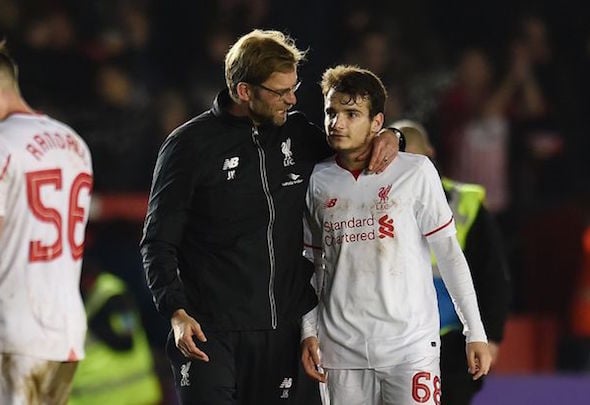 Liverpool midfielder Pedro Chirivella is set to move on loan to Dutch side Go Ahead Eagles, according to a reliable journalist.

Liverpool Echo reporter James Pearce has claimed that the 19-year-old is set to complete a move to the Eredivisie until the end of the season.

The Spaniard signed for the Reds from La Liga giants Valencia in 2013 and it is said manager Jurgen Klopp is a big fan of the teenager.

The Echo report that the German manager believes the youngster would benefit from playing first-team football.

Chirivella has made five senior appearances for the Merseyside club, failing to score a goal or provide an assist, but has caught Klopp’s eye from the Under-23 side.

He has made one Premier League appearance, in May this year against Swansea, but was hauled off at half-time by Klopp after appearing horribly out of his depth.

Go Ahead Eagles are currently bottom of the Eredivisie table on 12 points from 17 league games.

They have won three fixtures, with their last victory coming against current leaders Feyenoord in November.

The 19-year-old midfielder would definitely be better off out on loan and experiencing first-team football which will benefit both parties in the long run. Chirivella is not going to break into the Reds senior side anytime soon due to the high quality of players in front of him, and his first taste of the Premier League was a chastening experience. He would be better off learning his trade at a club where he can earn the chance to play regular first-team football. Go Ahead Eagles are currently fighting for their top-flight status in Holland and Chirivella can make a name for himself by helping them stay up. The move makes sense and we’d expect it to be confirmed officially shortly.

In other Liverpool transfer news, the Reds have rejected approaches for this midfielder.